Romance of the Three Kingdoms

So starts the 14th Century epic the 'Romance of the Three Kingdoms' telling the story of the turbulent period from AD220-280 when the Han dynasty struggled to unite the kingdom.  This epic, part legend part myth, by Luo Guanzhong is one of the most popular stories in China and even in the present day has inspired films, art and video games.

Its 120 chapters and thousands of characters starts with the government attempt to suppress a rebellion by the peasants called Yellow Turbans.  Personally I'd be with the peasants but this is a story of the perennial Chinese objective to keep the country together. We find Liu Bei who has fallen on hard times looking at a poster asking for brave men to join the government, he sighs. The man beside him Zhang Fei, a butcher, chastises him for not doing anything about it so the two go for a drink in a tavern and come across a bearded Guan Yu wearing a battle gown, I imagine lots of alcohol later they

swear an oath of eternal brotherhood in the peach orchard and set about trying to save the Han Dynasty (stamp left). The stamp (right) shows Diao Chen, one of the four beauties of ancient China pretending to commit suicide by throwing herself off the Fengyi Pavilion as part of a plot and intrigue. 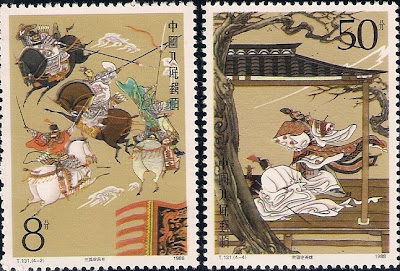 Next (left) our three heroes are fighting against the warlord Lu Bu and afterwards (right)  they drink wine and talk about heroes.  This set of stamps was issued in 1988 and were given the 'Best Stamps' award in 1989 and so no wonder in 1990 a second set appeared

The 20 fen stamp shows Cao Coa leading a night attack on Wuchao, a turning part of the unification war. Next the 30 fen shows General Zhao rescuing A Dou single handed.  A Dou actual name is Liu Shan but his childhood name is used because he is incompetent.  General Zhou is portrayed as just and virtuous with great loyalty and after his death was lauded as one of the Tiger Generals. 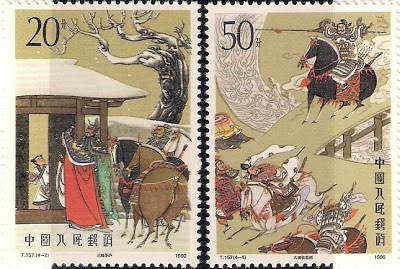 Lui Bei makes three separate visits to the great strategist and chancellor Zhuge Liang's Thatch Cottage, this is portrayed as patience rewarded.  Lastly the 50 fen shows Zhang Fei with only 100 men holding off the army of 10,000 at Changban Bridge which he destroys so that Liu Bei and his people can escape.

The stamp designer is Chen Quansheng (b1950) who went on to produce a third issue in 1996 which I do not have.  He is an artist and also a visiting professor at the College of Art, his brushwork on figure painting is considered unique. He also produces landscape paintings and comic books as well as other Chinese stamps on subjects such as Confucius, the Art of War and the 2001 'Strange Tales'.


An entry to Virdian Postcard's Sunday Stamps theme of - Stamps from China or Taiwan.

Lovely stamps and thanks for the history lesson, I learn something new each week from stamps like these.

An ancient Chinese story in stamps, this is amazing!

A fascinating story - and I am sure there are more chapters. the designer here has done an excellent job. Yet more stamps I have not see before. thank you for sharing them this week.

Wow, this is almost like a graphic novel in stamps art!
Thank you for that link, I have saved it and will later look up my stamps. It is nice to appreciate the artwork, but you miss so much when you don't understand any more about what it represents.

It's not at all surprising that they won an award. Really beautiful.

a perfect presentation of today's theme!

This is a very cool sets of stamps!