Birds of Air and Water

Charles Tunnicliffe RA (1901-1979) artist, engraver and book illustrator was the perfect choice for the 1996 stamp issue celebrating the founding of the Wildfowl and Wetland Trust.  He observed and sketched directly from nature and then when back in his studio spent hours creating a wonderful set of sketchbooks, works of art in themselves. Considered one of the greatest bird artists his collection now is now held at the Oriel Ynys Môn gallery, Anglesey an island where he had lived at 'Shorelands' on a river estuary from 1947 to his death.

His lapwing looks as though he has flown alongside it as it lazily beats its wings across the land.

Lucky indeed  if you spot a bittern in the reeds it is camouflaged so well, if alarmed it freezes making it even more difficult to see. It famous booming heard in the spring it an attraction to the birding visitors in the nature reserve of Leighton Moss just across the bay from where I live. 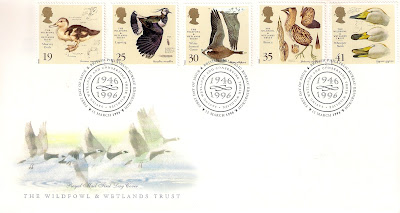 Peter Scott who founded the Wildfowl Trust in 1946 (later to become the Wildfowl and Wetland Trust) was also a fine artist but I always associate his works with large skies with wild birds flying across them, possibly too large a scale for stamps.  Scott's original founding of the Slimbridge reserve on the River Seven has grown to a total nine reserves.  He was also a great communicator of his love of nature and its protection, one of his aims to galvanise a worldwide movement to protect the wetlands, marshes, bogs, flood plains - anywhere in those magical places where water meets land.

That is a beautiful and educational series.

These are four truly beautiful stamps. I only have the lapwing.

Wetlands are special places - so important to birds and other species. Here in the USA they are seen as areas to be drained and turned into farm land - or parking lots. What is left is quite precious.
Thank you for joining in with such lovely stamps.

these stamps are lovely! and I got to learn about Charles Tunnicliffe! thanks a lot for sharing!

I have heard of Tunnicliffe, but have never seen these stamps - they are exquisite.

i am always fascinate with the animals that feature on stamp.This one is another cool collection.