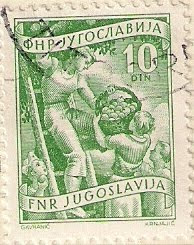 I have a copious numbers of stamps on agricultural themes but none it seems with the end product on a plate, or in a glass. This Yugoslavia stamp of the 1950s is from a set full of workers heroically toiling in the fields or industry but the exception is this bucolic scene of gathering apples.  The child on the left I think is amazed at the number of apples in the basket but I am sure is about to take a bite of the one in her hand. Who can resist a fresh picked apple. 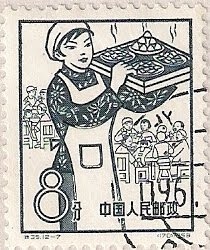 Stopping in the same decade I'm on theme with this one, a cook with a tray of hot food.   Mmm I wonder if there is any dim sum on there.  The stamp celebrates community meals as part of a 1959 set commemorating the anniversary of people's communes.  This propoganda poster shows

1958 Propaganda Poster
the ideal people's commune with the communal restaurant in the middle surrounded by a rich harvest and a wind that is blowing all those greenhouse gases in the other direction. 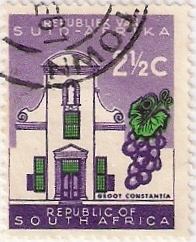 This South African stamp shows a gable of the historic Cape Dutch dwelling and national monument at Groot Constantia, and more importantly for that drink the grapes of this vineyard which has been here for over 300 years. This was the first definitive stamp series of the Republic of South Africa issued on 31 May 1961 when as the result of a whites-only referendum the country left the commonwealth becoming a republic and legislated for a continuation of apartheid. The same year it introduced the rand currency and this 2½ cent stamp was the cost of posting a standard letter. 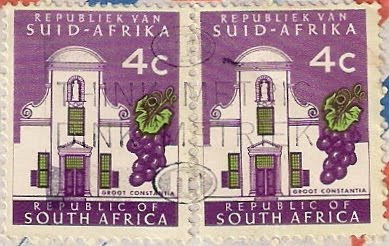 I presume by the fourth printing in 1969 the cost of letter writing had gone up. Enough to turn you to drink, or a wine tasting at Groot Constantia, today owned by a not for profit trust.

Ah! Dimsum, the mere mention of the word makes my mouth water.

I should go to the mall and get myself steamed shark's fin for dinner. :D

Thanks for sharing these stamps.

The one from South Africa is quite interesting, at least to me. :)
Thanks for visiting my entry.- Willa @ Postage Journal

I love the Chinese one especially. I think the gases shown being blown away in the propaganda poster are worse even than greenhouse gases.

Great to hear about the history behind the stamps, that was really interesting!