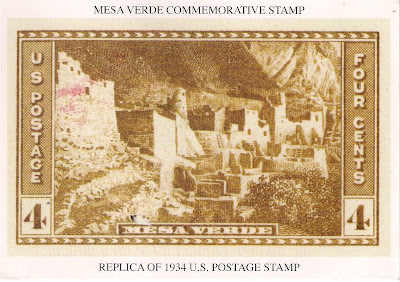 The card description says "This is one of ten commemorative stamps created to commemorate National Park Year. Mesa Verde, a World Heritage Site, is the first archaeological park in the US. Cliff Palace is the most famous cliff dwelling. Established June 29, 1906".

Mesa Verde is in Montezuma county, Colorado and has at least 4000 archaeological sites. Cliff Palace, originally the home of the Pueblo people centuries ago, has about 150 rooms and 23 kivas (rooms used for religious purposes).  Must be an amazing sight, the sepia card completes its ancient origin.

My sender was at Mesa Verde last year and saw a framed version of the actual stamp and was tempted to buy it to send on a card to herself.  The only thing to stop her putting this plan into action was a ridiculously large price tag, and the alternative view of the idea from her significant other.

This great stamp card of course came with its own stamps 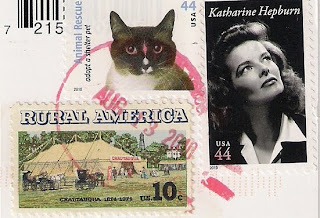 Clockwise, one of this years Animal Rescue stamps, all the animals featured had been placed with homes, such a cute cat.

The amazing Katharine Hepburn (1907-2003) the 16th person to be featured in the Legends of Hollywood commemorative stamp series. She made a huge number of films over a long career. African Queen with Humphrey Bogart, who won an Oscar for his performance.  One of  her own four Oscar was for, Lion in Winter when she played Eleanor of Aquitaine, a women as long lived and feisty as Hepburn herself.

Lastly another great stamp, the artist John Falter's gauche of  'Chautauqua 1874-1974' Tent and Buggies. This was a adult education  movement with travelling tent shows, taking entertainment, education and religion to rural America. Theodore Roosevelt called it "the most American thing in America".  To link back to the state of the postcard, one of the longest unbroken Chautauqua is based in Colorado.


Thank you Bonnie Jeanne for this fascinating card.
Posted by Joy at 00:49