A weather balloon flying above the clouds

Finland celebrated the origins of the WMO, which was the 1873 Vienna International Meteorological Congress.

China is a member of the WMO but can boast of 3000 years of records found in various historical records however their modern meteorological methods started in the 17th Century with continuous recording not happening until the mid 19th Century.

Today balloons, satellites and giant computers modelling the weather let us know what to expect when we venture to the great outdoors although Saturday here gave us three seasons in one day

so maybe I'll just look up to the sky and hope for the best.

I suppose the Middle East is beard central so here is is King Abdullah, founder of the Hashemite Kingdom of Jordan and mentor to his grandson, the late King Hussein.

Kings are a rich resource for all kinds of beards so here is someone you wouldn't want to marry if wanting a long life, Henry VIII.

Not a dissimilar beard vibe going on here with Francis I, a great patron of the arts. Not only can one see this portrait by Jean Clouet in the Louvre but also one of the King's purchases which was brought to France by Leonardo da Vinci always attracts the crowds.

The cossack army of Amur has arrived, I always think of them with mustaches but this one has a full beard.

At last I found a mustache, I was hoping for Frederich Nietzsche and his luxuriant mustache in my German stamps but instead of a philosopher I found the electrical engineer, inventor and industrialist,Werner Siemens

The 'Victory' set of stamps were designed and printed in London in 1919 and were available there for sale 3 months before the issue was released in New Zealand. Philatelists in New Zealand received their stamps from UK dealers before they were available for sale from New Zealand's post offices. The stamp shows a Maori Chief wearing the tail feathers of the now extinct Huia and a Whakai or ear pendant made from shark teeth.

The Tikar  people are known as great artisans, artists and story tellers and by the looks of this stamp, hair stylists.

The long running issue from Senegal of food being prepared at a market.

The Naprstek Museum specialises in collections of Asian, African and American culture and was founded by Vojtech Naprsek who converted his family brewery into a museum and library, after WW2 the museum has focused on non European culture. 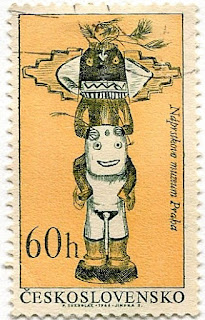 And lastly I couldn't resist including this happy person - Kachima a 'good spirit' of the Hopi tribe.

All is quiet in Moominland.

and all that can be heard is the tapping and rapping of a woodpecker and the rustle of a snake in the grass.

The 4 masted barque Viking was one of the last tall ships that participated in the Grain Race between Europe and Australia. How the wind is ripping into those sails. In 1909 with a full load of wheat she registered a record speed of 15.5 Knots (28.7km or 17.8mph). Today 10 four masted barques survive but only 5 still sail which is a miracle in itself. Viking was originally built for the Danish fleet but today is moored permanently in Gothenburg. 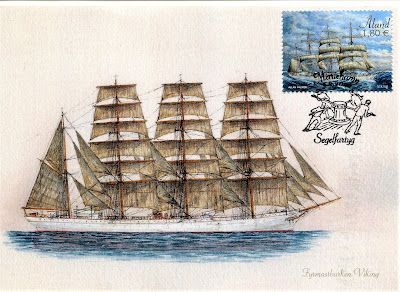 Here is Viking with all its impressive sails unfurled.

Or you might prefer something more colourful from Vietnam

A windy day. I wonder if those sails can cope?

The romance of the Postbus weaving its way through the countryside over bridges and rivers, sadly no longer with us, but what an excellent way to travel.

On to Lapland in 1840 and arriving at the Postal Agency, Nuvvus.  In the background is Nuvvus Ailigas Fell which rises up from the shores of the Tonojoki River near the village. In contrast the other stamp is the large and new Postal Centre building in Turku

And happiness the post has arrived in a pretty mailbox.

Riding in with lots of lovely post this speeding postwoman is stood up and, in cycling parlance, 'dancing on the pedals'.  I love these German issues of a stamp block and a fancy cancel

so here is another one.  The couple are from Ruegen, Germany's largest island on the Baltic Sea. I happened upon a Folk Costume and Embroidery blog which means I can narrow this down to where on on the island it is worn which is a peninsula called Moenchgut on the south east of the island, an area of fisherfolk and marine activity although today there is also a lot of tourism.