The Kingdom of Dahomey (c1600-1894) was located near the former slave coast of Africa so it is not surprising that this dance, the Nago, is one that is also performed in Haiti today.  The French took over the area at the end of the 19th Century and independence came to the republic in 1960 and it would eventually change its name to Benin.  The French connection remained for these stamps were designed and engraved by the prolific Pierre Bequet (1932-2012) who designed over 700 stamps which included the ex French colonies, French Antarctica and France itself including the 1971 'Marianne' definitive whose portrait he based on his wife Gisele. 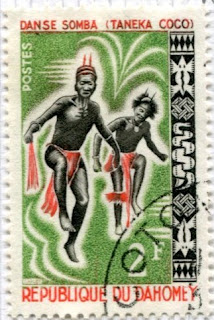 The Sombo and their dance  live in the mountainous area of Dahomey but are also present in other countries.
Africa is continent full of music and dance so here is an Angolan Bocoio. This is from a very attractive set of stamps and was designed by Albano Neves e Sousa (1921-1995) who also produced other stamps for the country and whose short biography enigmatically says for "reasons beyond his control he had to leave Angola and settled in Brazil". Angola like Benin has had a turbulent modern history.

From one continent to another we dance towards
Australia and those starting out on a career in the arts.
Now we have happy folk dancers from Bulgaria but sometimes a darker story may be intuited through stamps for the Bulgarian government was pro-Nazi and I wonder if that work and joy movement may be linked to the Nazi Strength through Joy (Kraft durch Freude).

No  work and joy nonsense here, only the fun of  high kicking dancers. 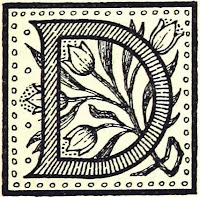 An entry to Sunday Stamps II and is D for Dance and Dahomey - skip over to See It On A Postcard for more words starting with the letter D. 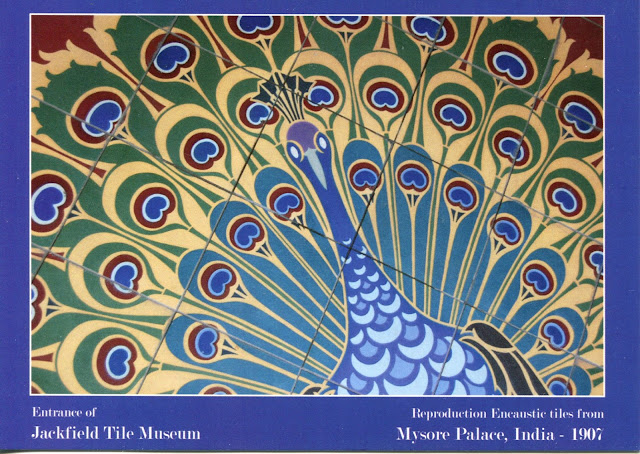 The octagonal Wedding Hall (Kalyana Mantapa) of the Mysore Palace in South India has a stained glass ceiling of geometric patterns featuring peacocks and floral mandala.  The floor has four large tiled panels also showing peacocks (a symbol of fidelity) of which the postcard shows a detail.  The Wedding Hall and its complex patterns took 2 years to complete involving the Maharaja, the architect, the executive engineer and the tile manufacturers chief designer, all that and then the numerous craftsmen needed to create and install.   The Mysore Palace was built from 1897-1912 after fire had destroyed the original.

A reproduction of one of the peacock panels also graces the entrance hall of the Jackfield Tile Museum because this was once the tile factory of Maw & Co who manufactured these particular ceramic encaustic or inlaid tiles and exported all over the world.

I went looking for a photograph of the Wedding Hall but discovered that all picture taking is forbidden inside the Mysore Palace however it didn't stop this couple sneaking in the palace to create a video for their upcoming wedding, they got into a whole lot of trouble but I think it was worth it. See here

Castles in the Air

We've got a busy day ahead, time to get buzzing with a fine cup of coffee from Colombia
on the way out perhaps passing by these workers on the coffee plantation.  Lets head to the teleporter which will beam us across the seas to the city of Prague
and Hradcany Castle. This was the design of Czechoslovakia's first stamp which appeared in December 1918 just after the first world war as the country emerged from provinces of the collapsing Austro-Hungarian empire. The limited technical equipment available at the time meant that there are many plate flaws and varieties so it can be a popular subject for a specialist collection, with the added attraction that the stamps were designed by the great art nouveau artist Alphonse Mucha.  He chose the ancient Hradcany Castle (also known as Prague Castle) which dates from the 9th Century as the subject because "the palladium embodys the past and future history" of the country.  In this ancient home of kings, emperors and presidents somewhere, in a hidden room, are the Bohemian Crown Jewels.

There are a lot more castles to explore

Feel like doing something more sporty?
Lets zoom down a mountainside and the Tatra Mountains would be a beautiful destination although I think my preferred option might be to watch this championship competition 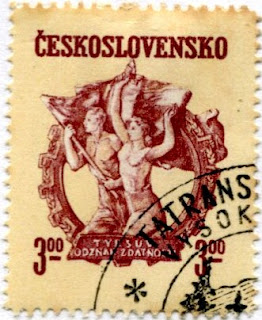 although I'll miss out on the efficiency badge.
This skier is enjoying the view and a sun bathed landscape, illustrated by Edwin Holgate he called it  'Contemplation' so lets contemplate another natural wonder and
this beautiful waterbird, the Common Loon whose eerie call I would love to hear for real across a northern lake.  The designer is Lawrence Hyde (1914-1987) and one can see why he was famous for his wood engravings in this attractive stamp.
The Grand Cayman thrush that once flew over mangrove swamps but became extinct in the 20th Century due,it is thought, to habitat loss which was a mix of deforestation and storm damage from hurricanes in 1932 and 1944.  A creature that once was also once found in the Cayman Islands was
a small species of crocodile now only found in Cuba so yes is called the Cuban Crocodile but only found in two swamps and is described as 'critically endangered' due to human hunting but captive breeding programmes are in place to  help the species recover. 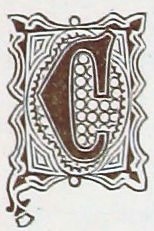 An entry to the Sunday Stamps II -  this week's prompt is the letter C - so welcome to the countries of Colombia, Czechoslovakia, Canada, Cayman Islands and Cuba - drink the coffee, see the castles, watch the championships, contemplate a skiing Christmas, hear the Common Loon, mourn the Cayman Thrush and beware the small but feisty Cuban Crocodile.
C more at See It On A Postcard.

This one of several vintage cards I was sent by Denise in Canada, a lot of them feature this same girl.  I wonder if she was the photographers girlfriend? I like to think so, I can imagine them going out together for a day or two of photography. This particular day must have been warm enough for her to take off her shoes the others feature more heavy duty clothing.  The postcards all have one thing in common they all feature the little captions on the theme of love and they are not studio portraits so must be have taken in the local park or wood. 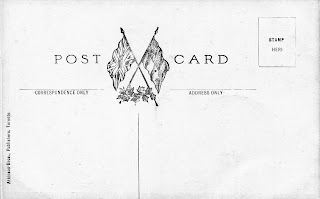 The postcard publisher is Atkinson Bros, Toronto who started to issue postcards about 1900 but usually of views or on a patriotic theme.

Fast forward to the 1930s and a time of women's emancipation 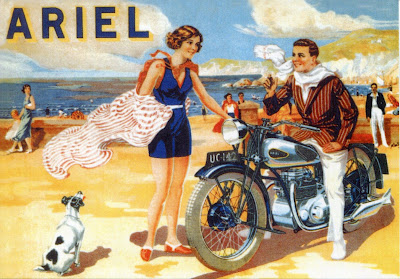 and a lot less clothes. This retro card is of a advert c1930.  It is a beautiful and, as is often the case in Britain, a windy day at the beach.  The white cliffs of Dover can be seen in the background.  The card says on the reverse "For 60 years, from 1901, Ariel was associated with some of Britain's best motorcycles. After WWII the company became part of BSA"  Is the dog hoping for a ride on the bike or just waiting to be taken for a walk?

Up, up and away this Finnish stamp's balloon floats over the golden glow of autumn as part of a miniature sheet. 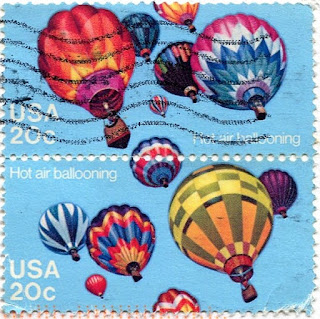 A mass of balloons float across a clear blue sky portraying the sport of hot air ballooning.  These were two of a four stamp set the USA issued to mark Montgolfier's and the world's first manned flight over Paris in 1783 meanwhile France's neighbour marked the bicentenary
with a balloon floating over an unnamed Belgium town. If it was floating over Brussels then this fine natural history museum would float into view on the Rue Vautier.

The Museum of Natural Sciences features on a stamp booklet cover and one of the museums etymologist, Morice Leponsce, uses hot air and helium balloons to float over tropical forests to study arboreal ant colonies and also collects plants and insects at 30m in the sky.   This year one of the balloons is on display elsewhere in Brussels in the magnificent surrounds of the Throne Room at the Royal Palace in an exhibition highlighting the museums research.   The stamp booklet however was issued back in 1996 to mark the 150th anniversary of  the Royal Belgium Institute of Natural Sciences with a celebration of insects (one of their vast collections) and happily these are shown in their natural habitat on the stamps and feature
the Ruddy Darter Dragonfly (Sympetrum saguineum) and Buff-tailed Bumblebee (Bombus terrestris) one of the first bees of the year to appear. 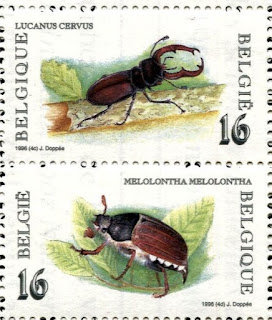 The magnificent European Stag Beetle (Lucanus cervus) and the Common Cockchafer (Melolantha melolontha) sometimes called the May bug for that is the month when it starts its uncertain whirling flight. 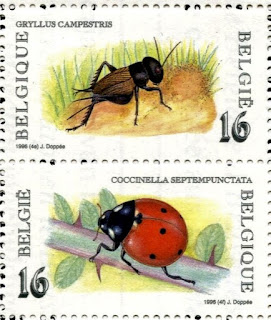 One may be more likely to hear the chirps of this dark brown insect than see it, the Field Cricket (Gryllus campestris) and lastly the lovely Seven Spotted Ladybird (Coccinella Septempunctata|) an insect the gardener always welcomes.  The stamps are the work of the Belgium watercolourist, miniaturist and engraver Jacques Duppée who has produced a number of stamps for Belgium.

An entry to Sunday Stamps II prompt of the Letter B - Belgium, bugs, beetles, bees and balloons - be quick  Bs at See It On A Postcard.

Albania in the Air

Letters are flying around the world carried in the yellow of Posta Shqiptare.  The Europa theme for 2013 was especially appropriate for Albania because it was also the centenary year of the first Albanian stamps (5 May 1913).  Laert Kraja was chosen to design both the Europa issue and the anniversary stamps (which are also se-tennant) and can be seen here.  The postal service was founded simultaneously with the modern Albanian state on 28 November 1912 but they continued to use the Ottoman Turkish stamps until the first Albanian stamps were issued in 1913.  Posta Shqiptare says " The first issue of the Albanian stamp consolidated the postal service of Albanian identity , which has always been the expression and part of our national identity. It was a long and beautiful way, the stamp is one of our valuable assets"

The airmail stamp features a Douglas DC-3 flying over Rozafa Castle, which  is located on top of a rocky hill which because of its strategic position archaeologists say has been occupied since antiquity.  The designer and engraver was Bohdan Roule (1921-1960) and I think this is the first stamp he designed and engraved, the set was the only one he produced that was for  a country other than his native Czechoslovakia.
We enter the jet age with the Tupolev TU-104A flying between the capitals of Albania and Russia.  Here is something that doesn't need anything more than a pair of wings to soar in the air -
the name Albania is the Latin name of the nation but the name the people call it is, as on the stamp, Shqiperia, meaning 'Land of the Eagles' or 'Children of the Eagles' and on this stamp the text refers to the nation as a rock of granite
which this child of the eagle is no doubt standing on.  I was surprised I didn't have any bird stamps for Albania, hence my use of their national symbol and this stamp has the added bonus of an Alsatian.   I wonder what the border guard will eat while standing on his eyrie?

|Perhaps he has brought an apricot with him from the valley below.