Down on the Farm

Cock-a.-doodle-doo, it must be time to get up, down on the farm
because there are cows to be milked. If the cows are Guernsey ones like these the milk will be golden and very rich in cream which makes a deep yellow butter and is also perfect for ice cream. The cancel incorporates a traditional Guernsey milk can.
Time to bring in the sheep down from the fells. 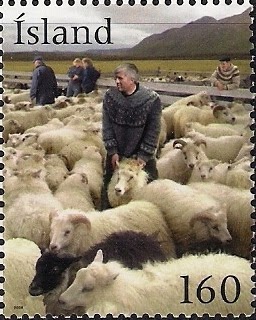 Icelandic sheep have high quality wool and the herder is wearing the iconic Icelandic sweater.  The Icelandic name for the circular yoke sweater is "lopapeysa." ("Lopi" is the name of the yarn traditionally used in its making, and "peysa" means sweater.)
The daffodils are out and lambs are in the fields here, it must be spring
and the summer in front of us which will determine the quality of the wheat.
Well, time to gather our produce together, wait at the bus stop, and take it to the farmers market 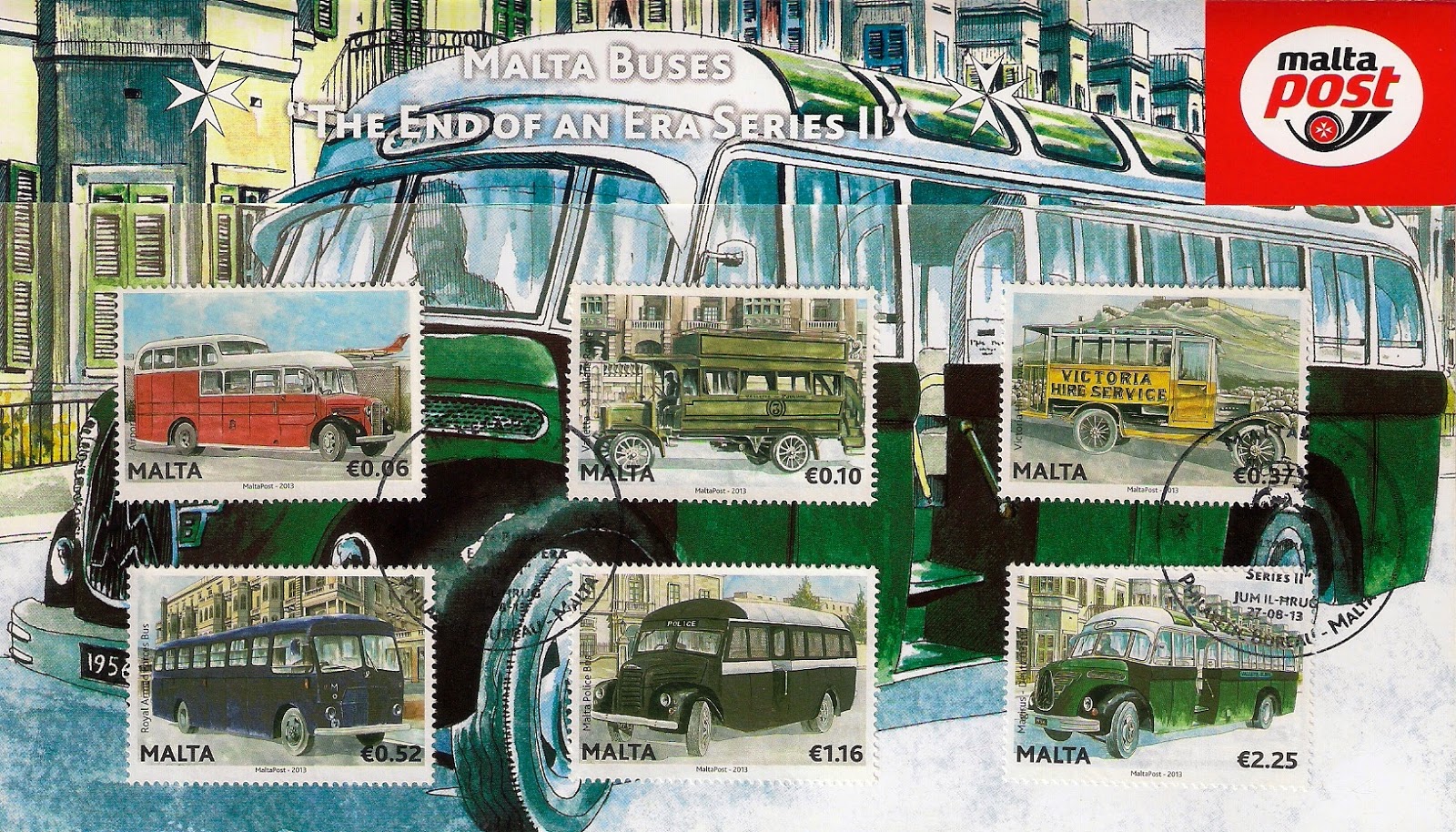 As I am away for next week's Sunday Stamps I couldn't miss out on buses so here are some old Maltese ones.  The only ones of these that survive are Malta's best known buses (shown in the background and bottom right). Loved by tourists, like me, who have visited the island in the past, The Maggie (a Magirus-Deutz with locally built bodywork) which were withdrawn in 2003 but some have been preserved and are now in the care of Heritage Malta.

An entry to Viridian Postcards's Sunday Stamps theme of Farms and Farm Animals and in anticipation of next weeks theme of Buses. 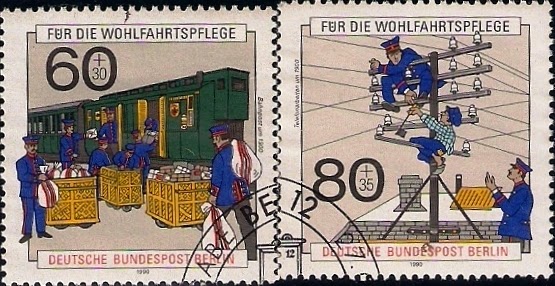 West Berlin issued its own stamps from 1948 until German reunification and in 42 years they issued 800 stamps, this set was the last one issued in 1990 on the theme of Posts and Telecommunications.  Happily each stamp is marked with what it is so  first we have Railway Mail in 1900 with the distinctive green mail vans. The letters were sorted on board and had a special oval cancellation with train number, route and date. Next are telecommunications in 1900.  I wonder, are that man's arms out to catch the workers if they fall off as they precariously hang on the lines. 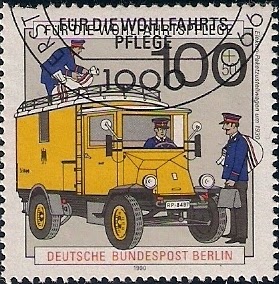 The stamps of West Berlin could also be used in West Germany and the separation of the postal systems was only symbolic and indeed they used the same post code system. The stamp shows a mail van being loaded in 1930. 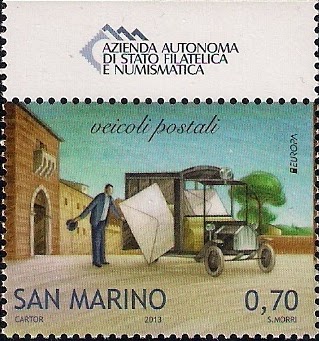 Another small stamp issuing entity is the 61 square kilometres of San Marino, possibly the world's oldest republic. They issued two stamps for the 2013 Europa Postman's Van theme designed by  the artist Stafano Morri, I love how the letters are stacked up in the car.  It is a vehicle from the beginning of the 20th Century parked in front of the city of Porta San Franceso 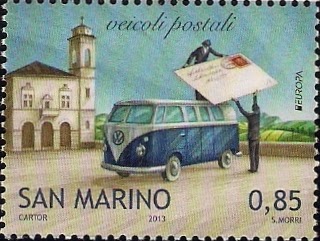 Next is a classic VW van of the 1950s in the colours of the San Marino flag loading its large letter in front of the Parva Domus, which is near where mail used to be sorted. 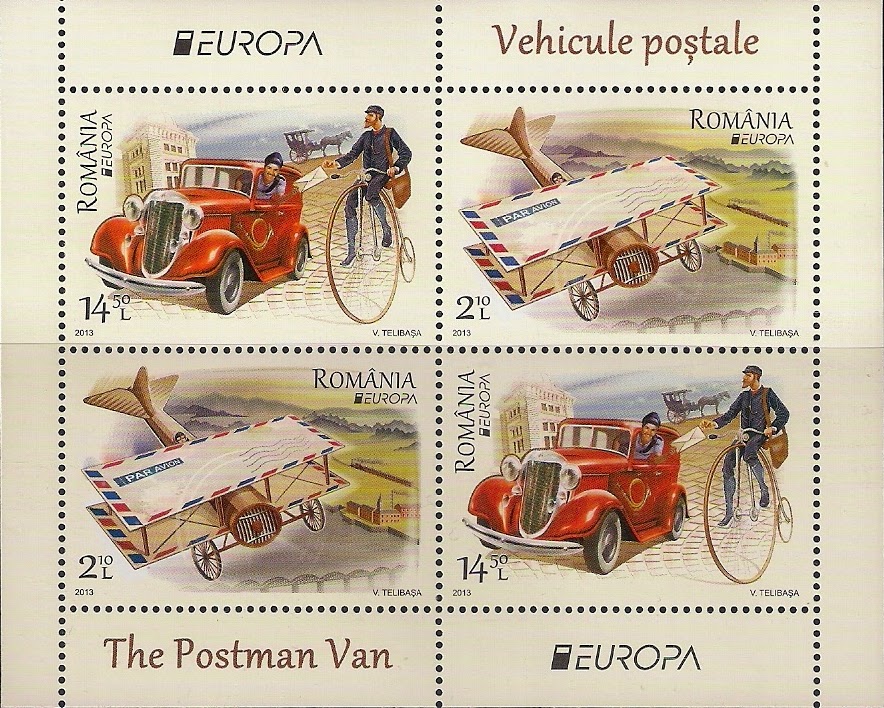 The large letter theme is continued in this Romanian issue of the winged par avion bi-plane zooming over the countryside and someone delivering a letter from his penny farthing with a horse and cart in the background. The sheet was designed by the artist Victor Telibassa 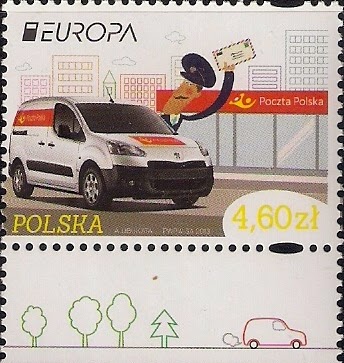 Our jolly postman waves an air mail letter from his van as imagined by Aleksandra Ubukala in this Polish issue for the 2013 Europa theme.  I like the little sketch on the sheet's margin.
And lastly a happy postman makes his way up a Swiss mountain road on his Electric Trike Kyburz DXP as shown on this Maximum card, fully loaded and letters and postcards stacked for delivery.

An entry to Viridian Postcard's Sunday Stamps theme of - Letters, Postcards and The Post here

The 48 stamps that Royal Mail produced for the millennium presented British history as chapters in a story, each done by a different artist. This one was created by Natasha Kerr, originally a textile designer with an interest in Italian renaissance frescoes.  Her career took an unexpected turn in the 1990s when her mother gave her family photos that had been languishing in plastic bag and she discovered an unknown family and her own story.  Inspired by this discovery she created art where she combines textiles and photographs, transferring family photographs onto antique bedlinen, painting and stitching pieces together to create individual pieces. She talks about it here   She also works to commission and I think that Royal Mail now owns this piece. I wonder if they have it on display?  Many suffragettes ended up in prison in their quest for the vote which would be a long campaign imaginatively using all means of publicity to make their point 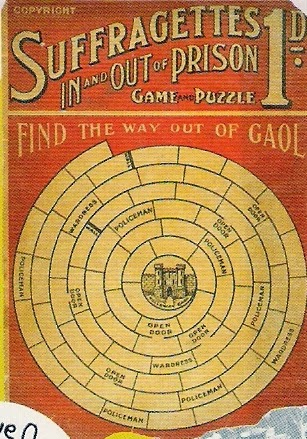 The vote was eventually obtained by British women in 1918 and this stamp celebrates the 50th anniverssary: 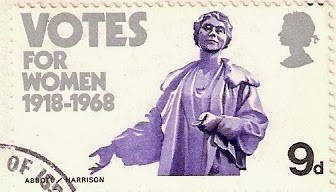 However not everyone had the vote as you had to be over 30 and own property and it was not until ten years later that all women over the age of 21 were enfranchised.  The Norwegians were slightly ahead of the curve 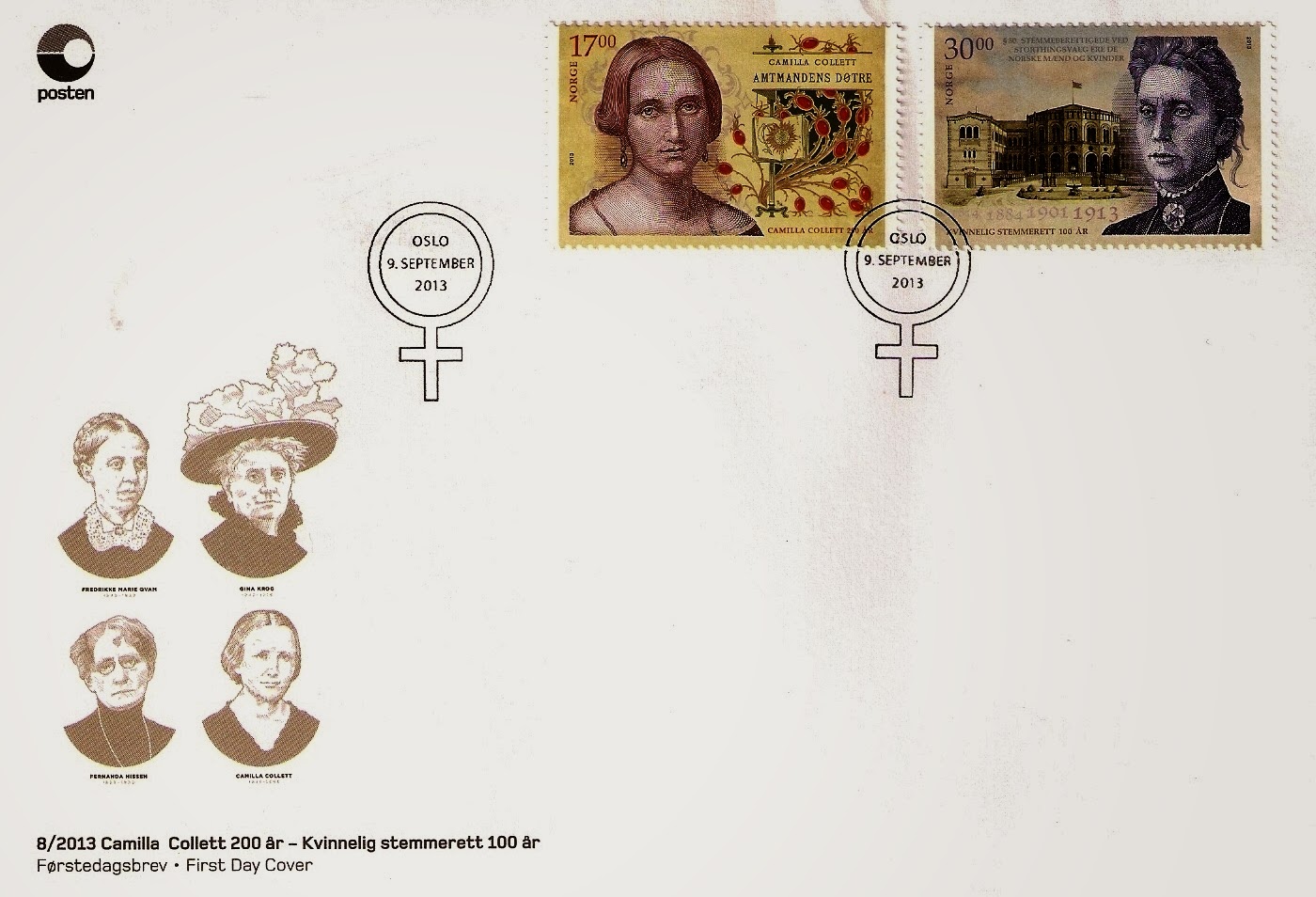 The one of the left is of Camilla Collett (1813-1895)  in front of her novel  'Amtmandens Døtre (The Governor's Daughter),  A feminist pioneer, her novel explores the difficulties of women in a patriarchal society. A pioneer in literary and cultural history of Norway she experienced tremendous change in society and the older she got the more radical she became producing essays and books on the annoyances of women's everyday life and more general problems.  Her portrait also adorned the Norwegian 100 kroner note from 1977-1994.

The other stamp and the cover itself concerns Gina Krog and nine other campaigners who founded the Norwegian Association for Women's Suffrage in 1885 and embarked on a long struggle. Their first small victory was in 1901 when women were allowed to vote in local elections but this was restricted to those of a certain income. In 1907 women were given the same restricted rights to vote in general elections. By 1910, unlike the British parliament, the Norwegian parliament (the Storting) were in favour of all women being entitled to vote. When Anna Rogstad (shown on the stamp on the right) became the first female member of the Storting in 1911 this gave impetus to universal voting rights for women which occurred in 1913.

In a continuation of the great tradition of Norwegian stamp engraving both stamps were designed and engraved by Arild Yttri who works as an engraver at the Norges Bank.  I wonder if he did the 100 kroner note of Collett.

The perfect day out, a steam train and a Victorian postbox.  The miniature sheet shows Locomotive Number 1 'Sutherland' at Douglas station.  Built in 1873 it was, as the number indicates, the first train to run on the Isle of Man railways and was named after one of the directors, the Duke of Sutherland.  Once there was about 50 miles of 3' narrow gauge track covering the island, but today only the southern line remains which runs from Douglas to Port Erin.  'Sutherland'  after her working life remained in store, then was painted and put on display in Douglas and for the 125th Anniversary of the Isle of Man Steam Railway (which this sheet commemorates) was brought back into service.  In 2013 she was once again put back into store pending a rebuild. 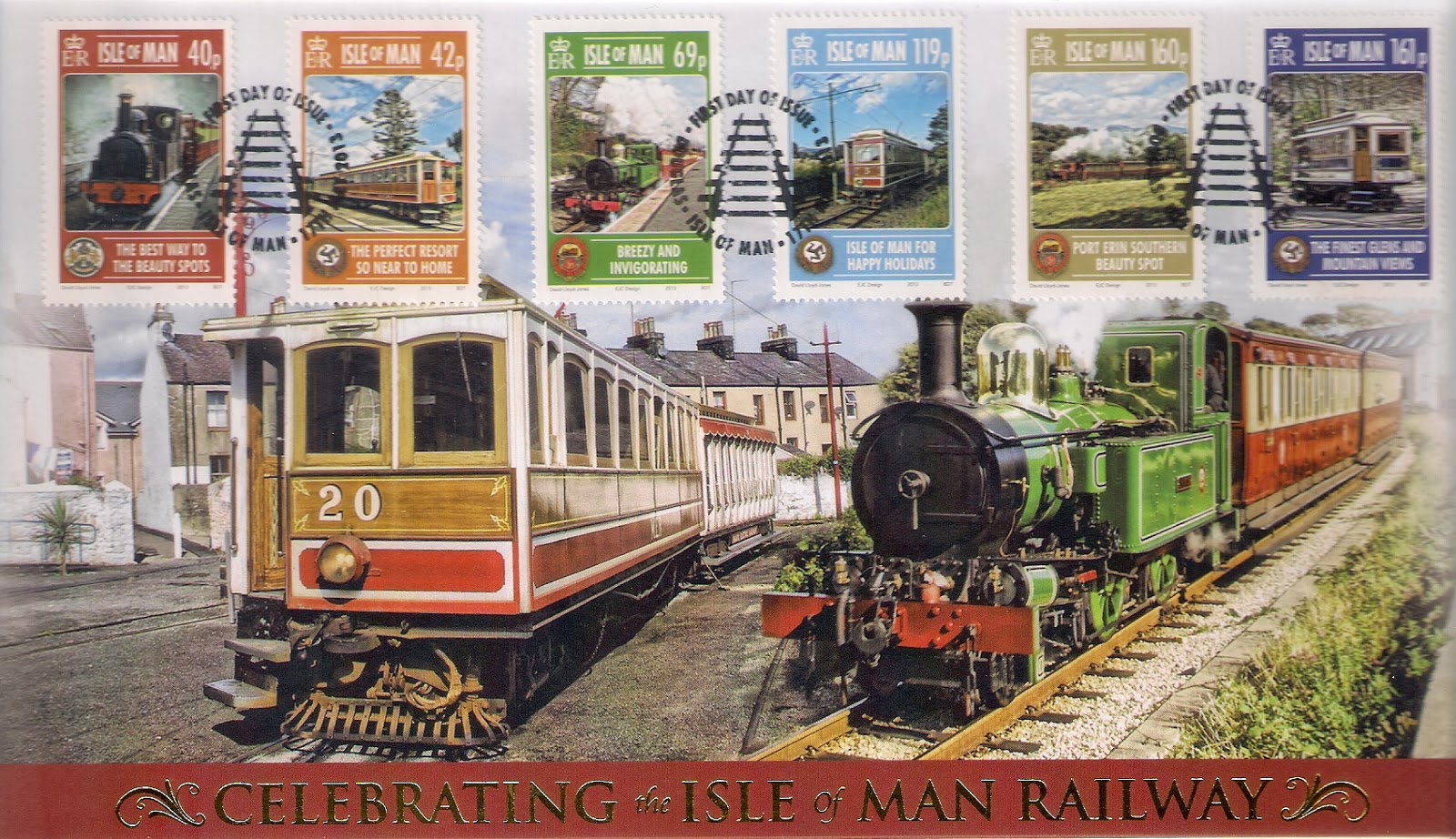 2013 saw the Isle of Man issue stamps of railway posters to celebrate the 140th anniversary of the Steam Railway and 120th of the Electric Railway to Laxey and reminding us of the happy holidays people have had over the years on the island.  I rather like the one that says "Breezy and Invigorating" as we have had a lot of those breezy and invigorating winds this winter.