I always marvel at the  tiny perfection of ladybirds and they appear like little jewels on this FDC.  Lets count the spots from the top left -  seven on the most common so of course that is the 7 spotted ladybird (always welcome in a a garden as they, and their larva, munch their way through hundreds of aphids) next to it is a newly hatched 7 spotted ladybird, waiting for its colour and spots.  Next comes the 2 spotted ladybird whose patterning and colour can be quite variable, all adding interest for the ladybird lover.  It is also the ladybird that is most likely to overwinter in houses.
The bottom line of stamps features an Orange ladybird which feeds on the fungal diseases on leaves, such as mildew.  Living high in deciduous trees it often flies at night and its presence is seen as an indicator of the ancient nature of a particular woodland.  Lastly we have a species that is pretty but lethal, the Harlequin.  Introduced into Europe because of its effectiveness at eliminating aphids it soon became apparent that it ate virtually all insects, including other ladybirds. 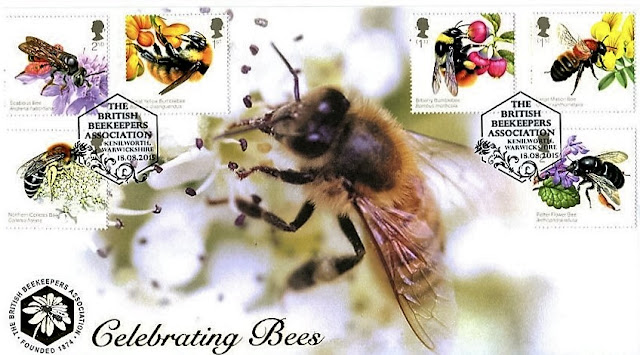 Another of my favourite invertebrates is my next choice, GB's 2015 Bees set.  The artist, Anna Ekelund has chosen to show them with the plant we are likely to see them on while walking the countryside or lazing in the garden. Lets buzz around the FDC clockwise from the bottom left :-
1)Northern Colletes (Colletes floralis) on a Wild Carrot;  2) Scabious Bee (the largest solitary bee) on yes you have guessed it, a Field Scabious flower. 3) The Great Yellow Bumblebee on a Bird's Foot Trefoil (Lotus corniculatus) while it forages in grassland. 4) the Bilberry Bumblebee which likes to be at higher altitudes and feed on bilberry plants (Vaccinium myrtillus) 5) Large Mason Bee, Britain's rarest solitary bee, on a Horseshoe Vetch (Hippocrepis comosa) and lastly 6) Potter Flower Bee (Anthophora retusa) on Ground Ivy.


An entry to Sunday Stamps II theme - invertebrates - for more spineless wonders See It On A Postcard
Posted by Joy at 12:36 5 comments:

Marine mammals commonly seen around the Channel Islands were chosen for these Guernsey stamps and.  designed by Jennifer Toombs with her usual attention to detail.  I am not sure if the backgrounds are particular places or just to give a flavour of the Bailiwick's coast. Clockwise from the top left are the Grey Seal (20p) which by coincidence also makes an appearance in Guernsey's Post and Go machine stamps this year of which the Guernsey Post's publicity says that Grey Seal colonies can be seen on The Humps (rocky islets off the tiny island of Herm) and the rocks around the Hanois Lighthouse, Guernsey.  Next is a Bottlenose Dolphin (26p) joyfully jumping and a Harbour Porpoise (37p), the smallest marine mammal and the one most likely to be seen near the shore.  A fish seems to have sneaked its way in here but sadly it is on the red list's endangered species. This is the Basking Shark, the largest fish found in UK waters (it can grow to 8 metres/26 ft) and is a protected species. What method could be easier to imbibes food than slowly swimming along with a mouth open?

The Vietnam 1985 set of 'Marine Mammals' portrayed whales at sea, here are three of them which are in order: the Killer Whale (Orcinus orca), Blue Whale (Balaenoptera musculus) and the Sei Whale (Balaena borealis)

An entry to Sunday Stamps II theme - Mammals of the Sea - Swim over to See It On A Postcard
Posted by Joy at 11:59 5 comments:

Head for the Hills 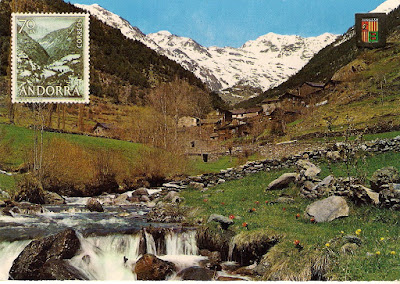 I'll start with an Andorra postcard showing a view of the Arinsal River which starts its journey in the mountains.  The stamp they have reproduced to complement it is one of the (Spanish) 1963 Landscape definitives showing the Anyos Meadows.  The mountains of course are the Pyrenees and this is a popular winter sports area.  Andorra is under the joint suzerainty of France and Spain and for the mountain loving philatelist the perfect country because both Spain and France issue stamps. The GRP1 , a 100 kilometre path which circles Andorra. crosses the Arinsal River. 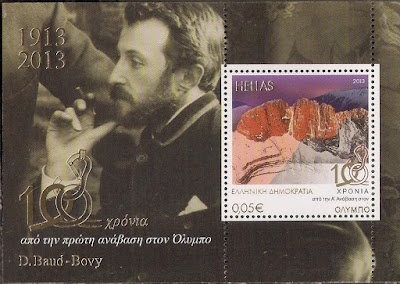 and the stamps show the major summits of the mountain of the Gods, Olympus, and the three climbers who made the first ascent on 2nd August 1913.  Two Swiss -  Daniel Baud-Bovy  and 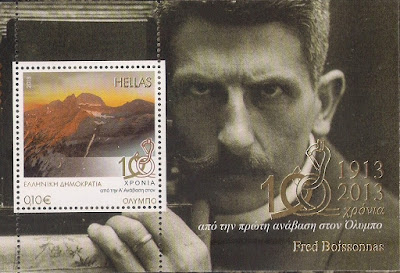 Frederic Boissonnas, the photographer and publisher 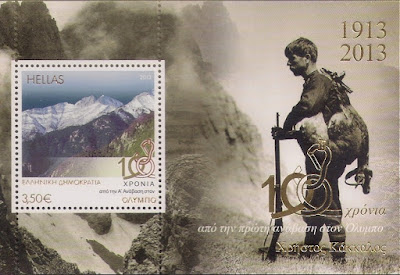 with their Greek mountain guide Christos Kakalos (a hunter of mountain goats) from the town of Litochora which is located at the bottom of the mountain and today is where most of the climbs start.  The photograph shows him on the Plateau of the Muses (2600m) 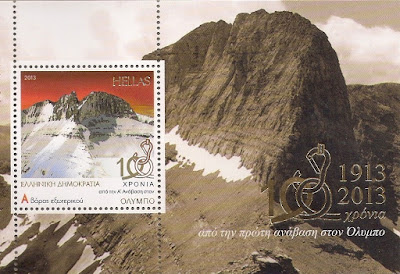 They experienced atrocious weather and when they raised the flag on what they thought was the top, the clouds parted and they saw they were on a lower peak, the Gods were obviously having some sport with them, so they had to descend this false summit and continue on their way up to the summit proper, Mytikas.  Kakalos's last ascent of the mountain would be in 1972 at the age of 93.  The article on the mountain refuge tells of his relationship with Olympus here


An entry to Sunday Stamps II theme - Mountains - climb for the scenery at See It On A Postcard
Posted by Joy at 12:10 4 comments: