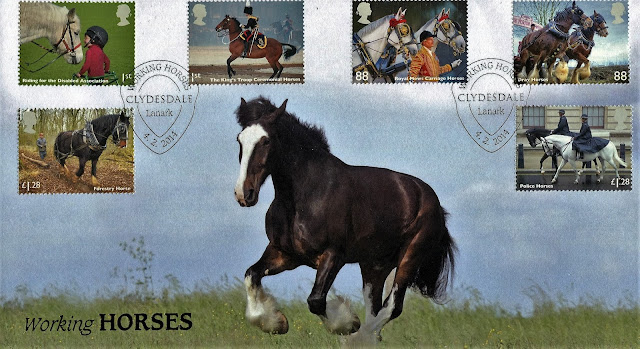 Horses are a popular theme for GB stamps in a variety of guises, the latest in the long line of these favourites were the 2014 Working Horses set here shown on a FDC with a galloping Clydesdale. 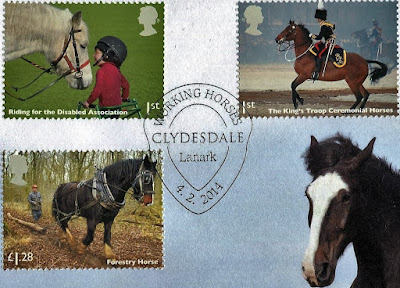 The stamps show 1st - Riding for the Disabled, 1st - The King's Troop Ceremonial Horses (the 111 horses based in London are always seen on state occasions) and £1.28 Forestry Horses (my local logger uses Dales ponies). 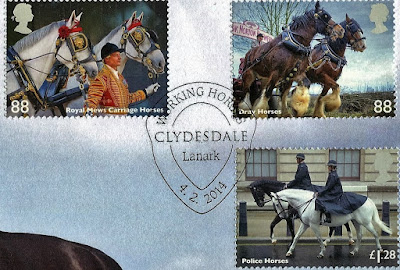 88 - Royal Mews Carriage Horses, 88 - Dray Horses (the stamp shows the Hook Norton Brewery dray which regularly delivers beer barrels by shire horse in the village of Hook Norton in Oxforshire and for nostalgia fans there is also a Victorian steam engine in the brewery) Lastly £1.28 - Police Horses, of fascination to visiting foreign fan to football matches who like to have their picture taken with them. This is not the first time police horses have been on GB stamps but lets see a more famous mounted force, 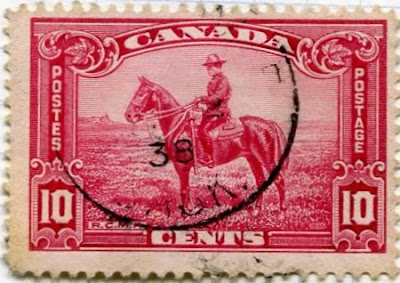 the Royal Canadian Mounted Police.  Although the cancel is indistinct on this definitive stamp happily the year it travelled stands out.
Poland issued a set of famous horse breeds, of which I only have two featuring a white Lipizzaner, the dancing white horses of the Spanish Riding School of Vienna and an English Thoroughbred, a breed that was also included in the Royal Mail's  1978 Horses set 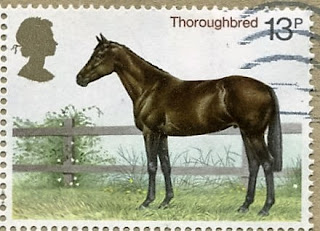 designed by the wildlife artist Patrick Oxenham.
The Portuguese Lusitano horse got a whole set to itself, known for its bravery and agility it is considered by Portugal to be a cultural living treasure.  The first stamp shows 'Working Equitation' which involves all sorts of maneuvers of horse and rider, the next is horse education which to my eyes looks like a high speed dressage. Lastly bullfighting, nothing gets killed in the Portuguese version. 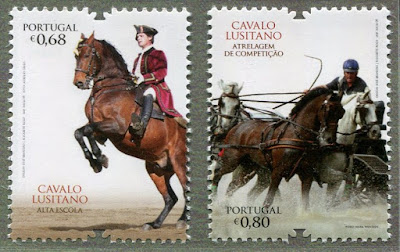 The left stamp above says Alta Escola which translates as high school and I think  may refer to the Royal Riding School of Lisbon, established in the 18th Century. Lastly the Google translate of Atrelagem de competicao is the rather impenetrable 'coupling of competition'.  I think it is the sport of Carriage Driving.

Continuing the Portuguese theme here are a couple of cavalinho (little horse) definitive stamps from the 1950s which refer to both the horse and the small size of the stamps.

An entry to Sunday Stamps II theme - horses - for more gallop over to See It On A Postcard
Posted by Joy at 11:10 5 comments: 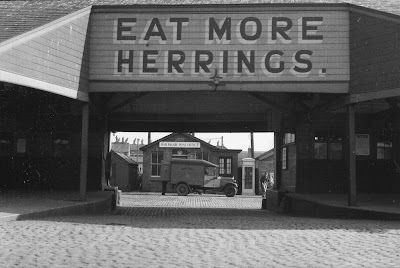 The stamps have an image code that can be scanned by a free SEPAC app which enables a video animation of the metamorphosis of the crystal to be seen.
The visualisation theme is continued in the Maximum Cards which are screenshots from an interactive program where one can guide a spaceship through quartz, fluorite or diamond crystal structures.

The program called Crystal Flight was created by Jeff Weeks and shown at the Museum for Minerals and Mathematics, Oberwolfach whose collection contains unique minerals of the Black Forest region.  A very short Crystal Flight video can be seen here 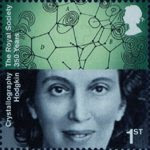 Dorothy Hodgkin (19019-1994) who developed protein crystallography where she determined the structure of penicillin, Vitamin B12 and insulin.  Working in those early years she was continually trying to improve the technique of x ray crystallography and with the help of one of the first electronic computers solved the 100 atom structure of Vitamin B12 in 1957.   She was awarded the Nobel Prize in Chemistry in 1964.   Lawrence Bragg likened her B12 discovery to "breaking the sound barrier"  He too has a stamp as one of the pioneers of x-ray crystallography whose discovery of x-ray diffraction is basic for determining crystal structures.
The stamp shows the regular cubic spacing of sodium and chlorine (which he predicted), in salt.  Lawrence Bragg was the youngest recipient of the Nobel Prize for Physics in 1916 at the age of 25 for his work in crystal structures.  The other stamps shows the colourful patterns on paper produced by chromatography and celebrates Martin and Synge's Nobel Prize of 1952

The orange may be a clue to this stamp for it is the synthesis of a molecule for vitamin C. Norman Haworth shared the Nobel Prize for Chemistry in 1937 for vitamin research.  Lastly the stamp celebrates conformational analysis, a process pioneered by Derek Barton using steroids and deals with the shapes that molecules can adopt by rotations about single bonds. A Nobel Prize winner in 1969 his name is remembered in science by a number of reactions named after him in organic chemistry .

An entry to Sunday Stamps II theme - Science - discover more at See It On A Postcard
Posted by Joy at 11:06 4 comments:

I thought I would find a lot of red in the stamps of Russia so that is where I turned for this week's Sunday Stamp theme, and I wasn't disappointed for these first stamps were very red indeed.  The first shows the cruiser Aurora which in 1917 was moored in St Petersburg for major repairs.  The crew joined the Bolshevik Revolution and the shot fired from the forecastle signaled the start of the assault on the Winter Palace and so started the October Revolution. 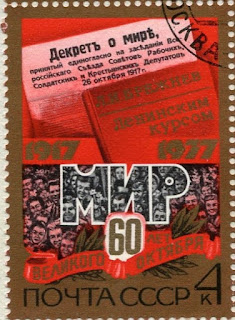 Perhaps the pen is mightier than the sword for this stamp shows a page from the Izvestia newspaper (first published in 1917), a book by Brezhnev (leader of the Soviet Union from 1964-1982) and a crowd.  From the 60th Anniversary of the October Revolution we travel to

the 61st anniversary, not quite as red, apart from the flag. 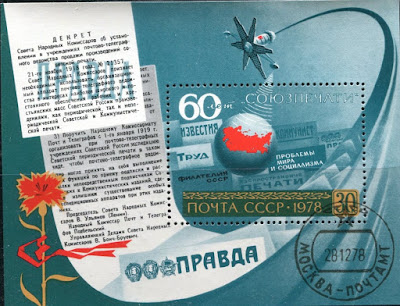 Another famous Russian newspaper appears swooping across this commemorative sheet, Pravda.  Established in 1903 it became the mouthpiece of the Soviet Communist Party but this sheet also shows lots of other publications because it commemorates the 60th Anniversary of 'Soyuzpechati', the state newspaper distribution service. Looking at the map of Russia on the globe I can only wonder at the enormous task that must have been in those early years, of course the communication satellite made thing a whole lot easier. I don't know the significance of the flower, which to my eyes looks like a carnation, but the Russians are great flower givers and lovers of flowers.
This is a set called Moscow Flowers, a place where the flower shops are open 24 hours a day.  The stamps show the tulip 'Bolshoi Theatre' and the rose 'Moscow Morning'

Next is the dahlia 'Red Star' and the gladiolus 'Moscovite' 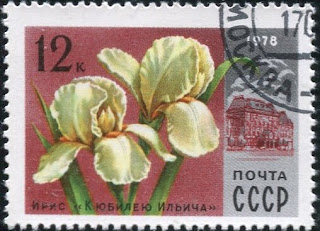 A white flower has sneaked in, happily it is on a red background.  The iris is called Il'ich's Anniversary.    I didn't know whether this referred to Lenin or Tchaikovsky, both of whose middle name was Ilich, but managed to google the building and its the Lenin Central Museum.


An entry to Sunday Stamps II theme - Red - be well red and visit See It on A Postcard
Posted by Joy at 12:33 6 comments: 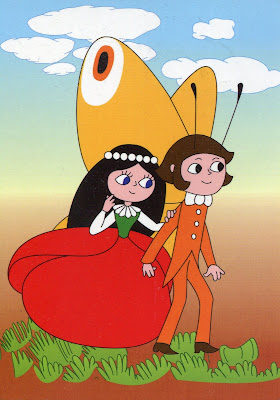 Come fly with me my butterfly love or is there only one butterfly here and the girl is an exotic flower? The card came from Iris in Taiwan  and one of the stamps matches perfectly with the girl's red and green dress.
This red and green fruit is the most popular lychee (they spell it litchi) variety in Taiwan, the Yu He Pao (jade purse).  The green fruit is an atemoya, a hybrid bred from a sugar apple and a cherimoya, sometimes called the pineapple sugar apple.  These definitive stamps (from a set of four) were issued to show the large variety of fruits in Taiwan and a second series will be appear in August 2016.

The Art of Venice

The sea has protected Venice since the 5th Century when the first settlers arrived, but no longer, for in November 1966 after two days of heavy rain, high tides and the Sirocco wind blowing, six feet of water flooded into the floating city.  The international community went into action to raise money and try to save some of the treasures under threat.

In 1971 Burundi issued these UNESCO 'Save Venice' Campaign stamps.  From left to right is an icon in St Mark's Basilica of the Archangel Michael (I can't help thinking of the spirituals song 'Michael row the boat ashore' in this context). Next are paintings which can be seen in the Venice Museum of the 18th Century by Alessandro Longhi who portrayed the Venetian society around him - La Polenta (Preparing the polenta) and Il Ciarlatano (The Charlatan).

No stamp set would be complete without the wonderful architecture of Venice (where there will be paintings inside!) The 15th Century Casa d'Oro (golden house) on the Grand Canal and the Doge's Palace.  The painting in the middle is by Giambattista Pittoni who rarely left Venice and indeed is buried there.  Burundi Post have called it Diana's Bath and there she is with all her nymphs around the stream but in fact it is from the painting 'Diana and Acteon' and in the actual painting Acteon is on the other side of the stream.  A popular mythical subject with renaissance and 18th century painters, Diana the huntress is disturbed by Acteon as she bathes in a forest stream and she turns him into a stag when he is killed by his own hounds. 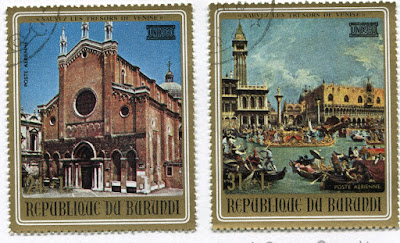 Many of the Doges and important characters of Venice have been buried, the St John and St Paul Basilica shown on the stamp.  Of course no collection of paintings about Venice would be complete without the most famous Venetian painter of all, Canaletto, and here is a detail from 'The Doge's Palace with the Piazza di San Marco'

The acqua alta (high water) still threatens Venice and now it regularly floods.  It is hoped that the major engineering works consisting of 78 gates which will separate the lagoon from the Adriatic Sea will, when it is finished, protect the city.  The project is called MOSE (the Italian word for Moses) an acronym of (MOdulo Sperimentale Elettromeccanico, Experimental Electromechanical Module).


An entry to Sunday Stamps II theme - Paintings - browse the galleries at See It On A Postcard
Posted by Joy at 12:46 8 comments: