The sun is out so lets spin those wheels of summer time and head for the beach
and cool off in the sea.
In the evening be entertained by the summer music and drama festival in Budapest.
The crops growing under the warmth of the sun. The interlaced sun perfect for the cover which is a celebration of the 50th anniversary of the International Union of Food and Allied Workers whose headquarters are in Geneva, Switzerland.  Today they consist of 430 member organisations in 130 countries representing more than 12 million workers.
Don't fly too close to the sun. Two stamps for the price of one, the Albanian one featured is from their 1962 Cosmic Flights set.


Sunday Stamps II theme this week is - summer, sun, hot -  enjoy the summer at See It On A Postcard

The stamp shows the dark blue waters of a mountain lake in Switzerland called Lac de Tanay which is described as a miniature paradise and was declared a national heritage site in the 1960s. The twin peaks rising up behind are the Jumelles (Grammont and the Col de Tanay).  Located on the Haute-Savoie border the stamp 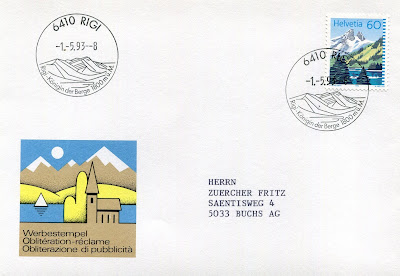 has been co-opted on to a FDC from central Switzerland celebrating a mountain that is almost surrounded by lakes - Rigi.  As the postmark says it is known as the 'Queen of Mountains'.  Summer is recommended as a beautiful time to visit and it has 120k of hiking trails with enticing names like - the floral trail, panorama path and the nature trail.  It does not end there for there is also a scenic railway ride and summer is when the steam train runs, for Rigi also has Europe's oldest mountain railway which opened in May 1871.
This rack and pinion railway was the work of the Niklau Riggenbach, engineer and locomotive builder, inventor of the Riggenbach rack system and counter-pressure brakes.   Ah yes brakes, always a good thing to have on a mountain. The maximum card celebrates his invention and 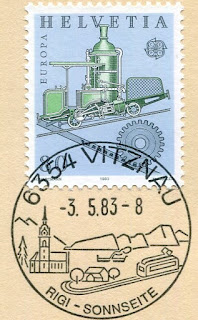 I found a picture on the web of him testing the system in 1870 running from Vitznau on Lake Lucerne (the postmark) to a point near to the summit. 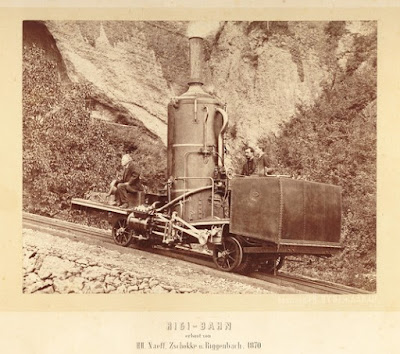 The zenith of engineering.  Riggenbach would also drive the first train upon the opening of the railway in 1871. The locomotive is still with us and is the oldest Swiss loco and the only remaining standard gauge rack fitted vertical boiler in the world.
Lastly we have one of the iconic Swiss Mountains, the Jungfrau, which is also the location of one of the great railway journeys, tunnels and viewpoints, with not only the highest railway station in Europe but also the highest post office.  The man in seat 61 takes us on the journey with travel tips. 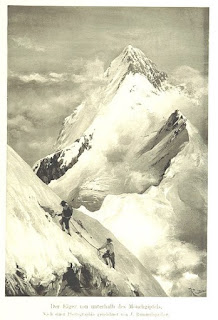 Sunday Stamps II prompt this week is the Letter Z - here for SwitZerland and zenith - See It On A Postcard.

An Ericson phone but not one which would happily sit in a pocket. As much a desk ornament as an object to communicate. I would love to wind the handle.  The card says on the back "Desk phone Ericson system from 1900. These devices date from the first period of telephony development and are characterised by a local power source, an inductor and electric bell are used to establish connection. The first installations of telephone sets began in our country Zagreb (1881) and in Belgrade (1883)
Here we are on the Sip Canal constructed to make navigation through the notorious Iron Gates gorge with its riverbed boulders, whirlpools and rapids easier.  The project was run by the Austro-Hungarian government and opened in 1896 but they miscalculated the fast river flow which meant that ships had to be navigated upstream by a steam powered tugboat and winding cable. Enter the Germans and their occupation of Serbia in WW1 and whose forces built a railway on the canal embankment and locomotives began towing boats instead of the tugboats. After the war the railway was reconstructed and  extended with 11 locomotives in service pulling boats.
You cannot see this scene today because of the Iron Gate Hydroelectric Power Station joint venture between Romania and Yugoslavia and the creation of the largest dam on the Danube meant it was flooded by the Derlap Lake in 1969.  Unfortunately this happened six month before it was projected with the waters rushing in flooding everything - the entire railway system and locomotives are now on the bottom of the lake. There was a scheme to try to raise the locomotives in recent times because these JZ Class 30 'Berliners' are the last remaining types but it came to nought.  The stamp was designed by the prolific artist Dušan Lučić(b1937) and the engraver Dušan Matić (b1939) who also collaborated on other Yugoslav stamps.