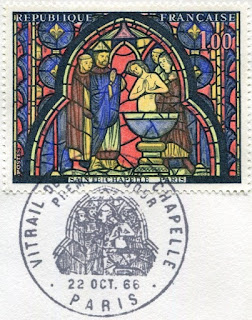 The stamp shows the 'Baptism of Judas'.
Staying in France here is the hill town of Vézelay and its abbey church, a UNESCO World Heritage site and also a pilgrimage destination.
More than a million pilgrims visit Kevelaer in Germany every year and in 1987 Pope John Paul II joined them to venerate the Virgin Mary and also visit the 17th Marian and 10th Mariological Congress.
The Norwegian church in Tromsdalen is nicknamed The Arctic Cathedral.  The card says on the back it was "consecrated in 1965 and is well known for its unique building style as well as its impressive glass".  Inside crystal chandeliers inspired by icicles hang down.  The card shows how the building stands out in its northern outpost and it can be seen shining out in the dark of winter here.
Here the light is not shining out from the church windows but being lit up from outside.  In 2000 funding from the Millennium Commission enabled 400 churches in England, Scotland and Wales with the help of lighting engineers to floodlight their buildings. The church chosen for the stamp was St Peter and St Paul in Over Stowey, Somerset. The oldest part of the church is the 14th Century tower and part of the nave.

In celebration of Lady Hale's giant glittering spider brooch as she gave the judgement of the Supreme Court that suspending parliament was illegal here is the real thing, a tarantula.
Brenda Hale's super power is the law.

A 'Sunday Walk' for Sunday Stamps, one can almost feel the heat of the day on this painting. The father leads his family holding his hat as an impromptu sunshade and almost hidden in the wheat is a small child holding his hand.
The day has come to a close and the great German Romantic painter Casper David Friedrich paints 'Man and Woman looking at the Moon' in 1824.  A rare painting of his personal life for this is him and his wife Caroline Bommer who he married in 1818.  For a contrast in style I turn to
Oskar Schlemmer (1888-1943) painter, sculptor and theatre designer who interestingly created a robot ballet and so we have the mechanistic creatures painted on the left  in the almost abstract 'Concentric Group' (1929).  This year it is the Bauhaus Centenary so what better stamp than the painting of the 'Bauhaus Staircase' (1932), the last major work of Oskar Schlemmer.  It shows students leaving a class in Walter Gropius's Bauhaus building in Dessau
Bjørn Wimblad (1918-2006) liked to portray whimsical round faced people and this design was specially made for this stamp. He was a painter, designer and ceramicist and these same round faces appear on his vases.   Make People Happy was his motto and what raises the spirits more than the sound of bird song. 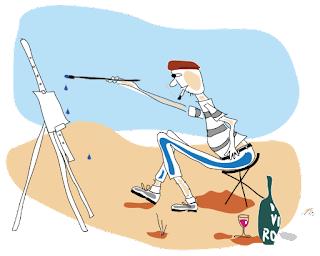 While on holiday I took a wander along the River Stour and arrived at Flatford, made famous by Constable's huge landscape painting of 'Flatford Mill'.  An ice cream shop is always a welcome sight especially on a warm summer's day, this kiosk also has the added attraction of a postbox (postcards available at the nearby National Trust shop)
The postbox could do with some TLC. 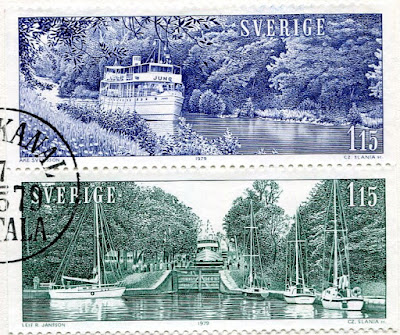 in the Juno launched in 1874 and  still going strong - the 'world's oldest registered ship with overnight accommodation'.  Sail serenely through Sweden for 120 miles, take a leisurely view of the world while passing through the 58 locks.  The view on the stamp is of the Borenshult five flight lock and the boat coming down is the Wilhelm Tham another vintage ship built in 1912 and still carrying passengers on the canal. 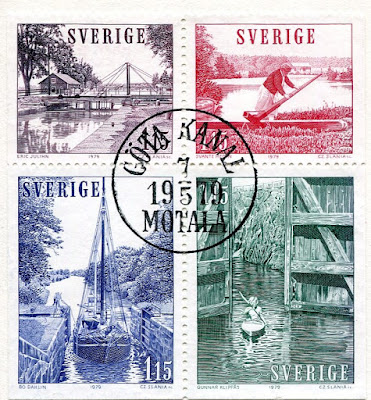 I love canals with their winning combination of engineering, history and wildlife.  The top left stamp shows the old roller bridge at Hajstorp which was originally hand drawn, top right is the Lock guard and Ricksberg locks. If you enjoy messing around on boats then above is a sailing boat at Godhogen and a canoeist in the oldest lock (1813) on the canal, Forsvik lock.  The stamps are engraved by Czeslaw Slania from photographs and I think this photograph is a set up to show the scale of the lock gates for I have never seen canoeists use locks.  It is quicker to take the canoe out and walk up past the locks, not to mention sitting in a tiny canoe and having tons of water pouring down as the lock fills up but it does make a great picture.

If you have taken the 6 day cruise on the Juno stopping off at various points on the way then at the end it traverses Lake Vanern, the biggest lake in Western Europe.  The journey route can be seen here

The construction of the canal was started in 1810 with the Swedish admiral Count Baltzar von Platen commissioned to build this shortcut between Stockholm and Gothenburg.  (His grave is on the side of the Göta Canal in Motala, the postmark on the FDC).  He had the advice of one of my engineering heroes, Thomas Telford, the son of a Scottish shepherd, apprenticed as a stonemason who became one of the greatest engineers of the 19th Century.  The unsung heroes are of course the workers or navies who actually constructed these marvels but in the case of the Gota Canal this was 60,000 conscripted soldiers (16 regiments), a company of Russian deserters and a number of skilled civilian workers with some British foremen and craftsmen thrown into the mix.  The canal was completed in 1832. 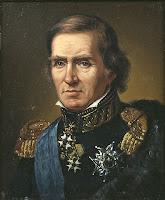 The Mars 3 robotic space probe flies above the red planet.  The descent module would eventually land but unfortunately in the middle of a Martian dust storm which was probably the reason it only managed to transmit for 20 seconds.
Another day another planet this time the more hostile Venus. I think this stamp set celebrates the Russian Venera programme, the most extensive exploration of one planet which took place from 1961-1985 and consisted of 3 atmospheric probes, 10 landings, 4 orbiters, 11 flybys and even 2 balloon probes into the clouds. Did someone say balloons?
The Royal Vauxhall Balloon which in 1836 Charles Green and crew of two set off from the Vauxhall Pleasure Gardens across the channel and eighteen hours and 480 miles later landed in Germany.  This set a new record which lasted until 1907.
Of course if you are a Comma butterfly then flying comes easy and it always amazes me the distances these tiny creatures can cover
Perhaps they will be attracted to the scent of a Bourbon rose in a garden but
not be lured by a Venus Flytrap. Yikes -
Zamindi, a 'dreadful god' with ripper teeth and five skulls but on the good side she does have the eye of wisdom in the middle of her forehead. 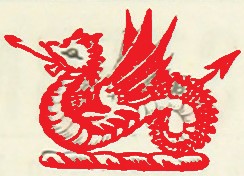 It was a stormy day in the flood season and a man from the state of Chu
wanted to cross a river
but the water was a raging torrent. 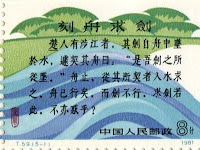 As he crossed the river

the boat was tossed on the waves and his sword slipped from his hand.  He loved the sword.

Then he had a brainwave and made a mark on the side (gunwale) where he had dropped the sword. He said to his puzzled companion "I have made a mark here to remind  me where my sword fell in the water. Later I will be able to retrieve my sword by the location of the mark"
This ancient fable gives rise to the Chinese idiom of  'Finding a Lost Sword'. The moral of the fable is one must take into consideration changes in circumstances and adapt to change. Don't isolate yourself from reality or adhere to fixed rules and patterns.  The story is sometimes called Marking the Gunwale. The artist is Pam Keming (b1940) who has said that she enjoys making art from philosophical ideas.


Sunday Stamps II prompt this week is - Water - join the flow at See It on A Postcard.