In my local indoor market a philately shop has appeared, it took me two turns around the labyrinth to find it and that was only because I was heading for one of the doors having given up, thinking my information was incorrect, and there in the corner was big sign saying - STAMPS. Oh be still my beating heart. I changed my mind with what I was going to post for Sunday Stamps so here is my latest purchase which I realised when I got home would fit this week's theme perfectly. 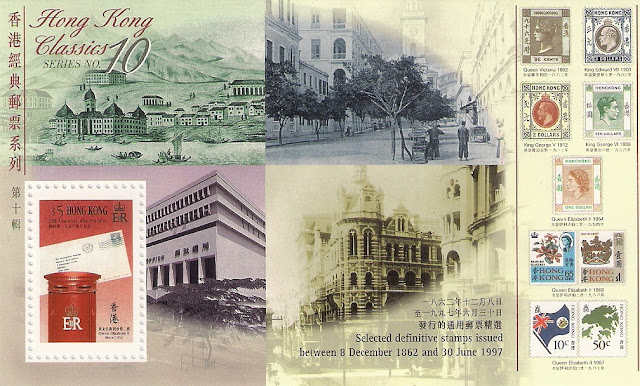 Issued on the last day of return of Hong Kong to China (31 July 1997) from British Government this is from the 'History of the Hong Kong Post Office' series. In the spirit of "One Country, Two Systems" Hong Kong Post is a separate entity to China Post. Most of the original British red painted boxes with the royal cypher are now gone and replaced with the green boxes featuring a Hong Kong post logo but this sheet features an original Queen Elizabeth post box, who knows it may be this one now painted green.  The 150th anniversary of the Post Office took place in 1991 which featured post boxes from the different eras. Despite the post office being founded in 1841 they did not issue stamps until December 1862 with the Queen Victoria, one of which is shown on this sheet  followed by the first definitive stamps from the different reigns .  This year they are issuing some stamps on stamps to celebrate the anniversary of stamp issuance.  Before 1862 parcels and envelopes were postmarked as proof of postage.  Now lets cut to the chase  and those buildings (I especially like that street view on the right).  There is no need for me to do any research because turn over this mini sheet and voilà 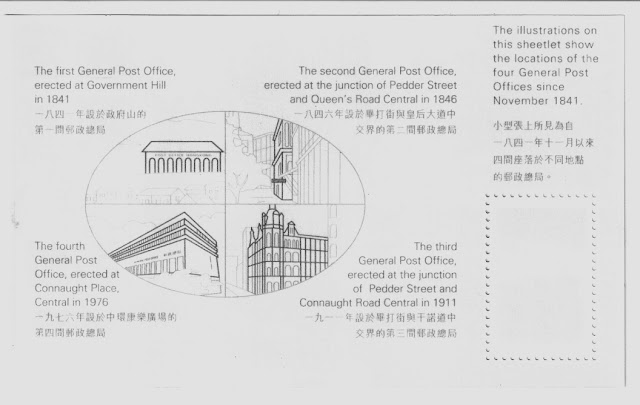 there it all is. I found a photo on wikipedia of the 1911 post office (complete with tram) which I was going to show but this Library of Congress Carpenter collection photo has everything, a post office, rickshaws and a seafront.

It is of a similar post office which they say was taken between 1890 and 1925 by the Mee Fong Studio, it is either the same one on the sheet or they built them all in the same style.


An entry to Viridian Postcard's Sunday Stamps theme of - "Commemorations"

What better way to celebrate geology and the earth than these two stamps, although my choice may have been  influenced by the fact that an Emperor Penguin appears on one of them.  They both commemorated the International Geophysical Year which actually lasted for 18 months but when studying things that have been around for billions of years I guess a few months does not make a difference. The stamps feature a glaciologist and an Antarctic map with the Russian base.  The Punch magazine featured a cartoon at the time  that sent up the three UK, USA and USSR bases and their interaction with the penguins here.  The IGY's aim was to co-ordinate the collection of geophysical data from around the world. The work at the pole led to the Antarctic Treaty of 1961 whose aim is to  protect the area and devote it to peace and science.
Doesn't look too peaceful here as Manganese is blasted out of the earth but I do like the stamp which is quite unusual by showing the process, the element and the chemical symbol. Manganese is essential to iron and steel making and South Africa provides 80% of the world's supply from the mines in a desert region of the North Cape. There are large thick continuous seams which Peter Toth a CEO said was a "dream from a mining and geological point of view", although getting it to a port is an altogether more difficult process.

The stamp designer Hein Botha has produced other geology stamps for Namibia and also the succulent plants definitive series for South Africa whose curious shapes have a rock shaped element to them. 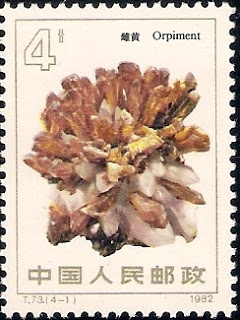 But back to a classic view - the  "Minerals of China" stamps starting with Orpiment beloved by alchemists in their unsuccessful search for ways to make gold. 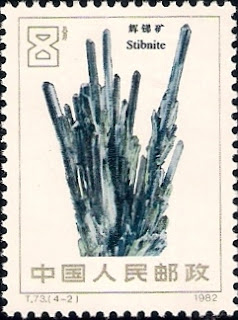 Stibnite used in the ancient world ground into fat pastes as eye liner and to darken brows and lashes known as Kohl. 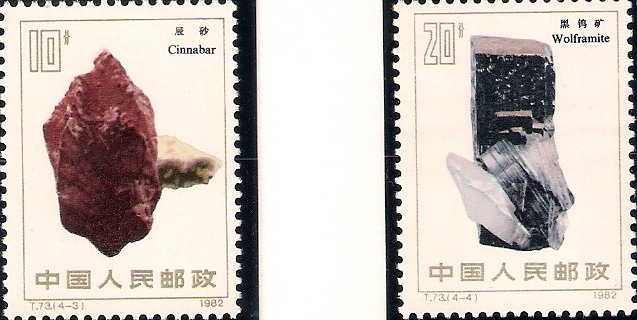 And to complete the set here are the wonderfully named Cinnabar and Wolframite.

As today is Remembrance Day for the fallen of all conflicts I thought I would do something connected to the First World War but far away from Flanders Field which is this Isle of Man miniature sheet commemorating the postal history of the Knockaloe Internment Camp.  This was a place where "enemy aliens" were detained for the duration of the war, mostly Germans and Austrians. The 24,000 men were in effect inside a self-contained township which was originally envisioned for 5,000.  It was built of wooden huts covering 23 acres and the left hand drawing on the sheet is from a coloured steel engraving of the camp by the internees and inserted are pictures of Peel Castle and Patrick Church where 200 of the internees, who died during internment were buried.  These were repatriated in the 1960s to the Cannock Chase German War Cemetery in Staffordshire apart from some Jewish and Turkish graves which still remain.

There was a wealth of talent within the camps of academics, artists, musicians and craftsmen but it was considered one of the toughest camps on the island, those with influence moved out to other camps so the remaining inmates of  Knockaloe were egalitarian and it was considered a socialist camp.

The top pair of stamps show a postcard of drawings of the accommodation, just seen is a line of washing between the huts which is repeated on the background of the stamp 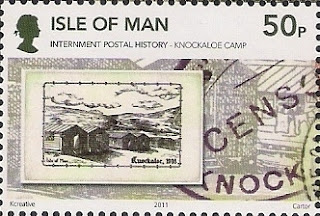 and a 1915 envelope with a censors stamp.  The camp had a printing press and they produced Christmas cards and as can be seen in the bottom set of stamps "Easter Greetings to Home".  The camp did not close until 1919 when many of the inmates were deported, many against their will as they had established a life in Britain prior to the war, as can be inferred from the stamp of a registered letter sent in 1915 to Miss Hilda Reeves in London.

A Bell telephone system and all the operators asking "what number do you require", from the US National Archives is this week's prompt.  I wonder if any are like Lily Tomlin's  amusing portrayal of the omnipotent Ernestine the operator?  And how many telephones were in America at this time?  I don't know but there were 1300 in the Lancashire town of Preston in 1922 because 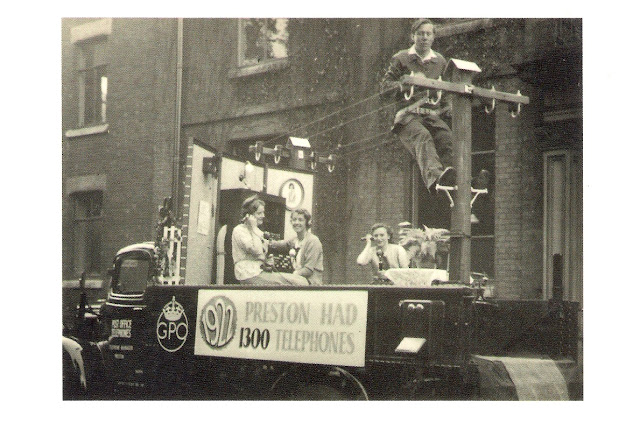 this float tells me so. To get everyone involved the GPO has installed a telegraph pole on the back of the lorry, bet that was a high-ly sought after position.  The General Post Office at this time looked after all means of communication letters, parcels, telegraphs and telephones. From  the 1880s the Post Office were in charge of all telephone exchanges apart from in Hull, Portsmouth and Guernsey who had their own local companies.  You could always spot the Hull telephone directory in a library that had a full set of Telephone Yellow Pages because in contrast it was grey covered.  The GPO changed in the 1980s when the telephone system was privatised by the Thatcher government and that section became the behemoth that is British Telecommunications.

But back to the lorry and its crew of GPO workers.  The date is 1952 and the event is Preston Guild.  The famous expression when something rarely happens is "once every Preston Guild" and it was even more apt in 1952 as this once every 20 years event had been cancelled in 1942 because we were in the middle of a World War.  The Guild celebrations dates back to 1179 when Henry II granted Preston market town status and the 20 year gap was chosen in 1542 because that guaranteed the memberships of the guilds were renewed at least once for each generation.  This year was a Preston Guild year and there have been a variety of events and it once again had the trade floats but going back to 1952 and another form of communication
the television. Here is the Horrockses "the greatest name in cotton" Television float. Clothes rationing had ended in 1949 and these 1950s cotton dresses could use as much fabric as they wanted and took full advantage.

Returning to the days when you asked the operator for a place and a number and the black and white TV detective series had someone asking the operator for the Scotland Yard number  - Whitehall 1212 and a time when companies didn't cold call, that would be bliss, here is Rose Murphy and the infectious  "Busy Line": 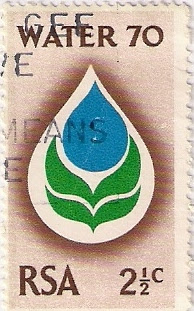 All living things need water, this was the symbol of South Africa's 1970 Water Campaign 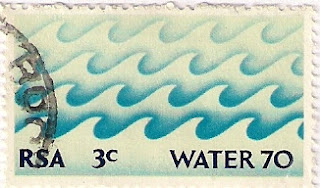 National Water week in South Africa takes place in March, the same month as World Water Day.  For a water scarce country which depends for much of its water on rainwall the "save water" message is an important one.   I couldn't find the theme for the year of this stamp set (1997) but this year South Africa's slogan was "Water is Life Conserve it, Respect it, Enjoy it".

South Africa runs many campaigns both to preserve and protect from pollution water resources. Leaving Africa and journeying to a continent with more water and to the mountains 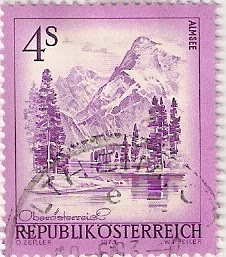 and the crystal clear water of the Almsee lake in upper Austria fed by springs and rivers but for
Water Music this may be the best stamp.  To save you swivelling your head around to see what is refelected in the water 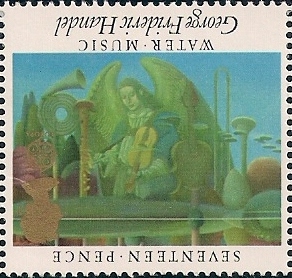 here it is the 'wrong' way up.  Finally  I could not resist the combination of Handel's Water Music and Seahorses:-


An entry to Viridian Postcard's Sunday Stamps theme of - Water