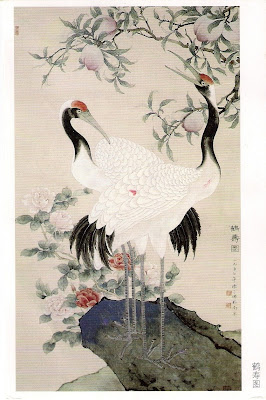 This gorgeous card from China came from Postcrosser Silverstro, it did not scan well so I have tried to darken it a little to show up the detail. The sender Postcrosser Silverstro says "this is a card of traditional Chinese art.  Red crowned cranes stand for elegance and long life".  The red crowned crane lives in the north east of China and in autumn migrates in flocks, what a stunning sight that must be. The red bare skin on the crown becomes brighter in the mating season and the feathers are described as "snow white" a wonderful contrast to those black edged wings.

Red necked cranes appear in many myths and legends and it is sometimes called the 'fairy crane' or 'crane of the immortals' in Taoism where it symbolises longevity and immortality. The peaches they stand beneath also symbolise longevity. I seem to remember that the China rose stands for grace and beauty but I am sure the colours the artist has used have meaning too.

The card came appropriately with a 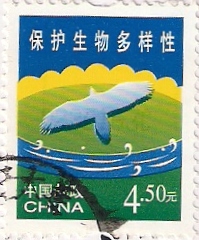 bird flying over water. It is from the "Protecting the common homeland of mankind" series of definitives which started in 2002 and this 4.50 value's (first issued in 2004) message is of biodiversity protection. 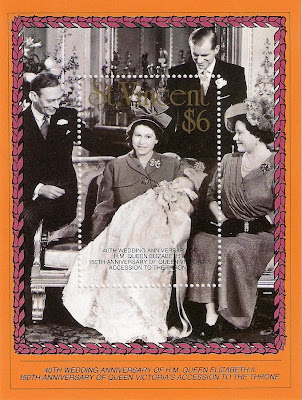 Missing last weeks Sunday Stamps I thought I would combine its theme of monarchs and presidents and this weeks theme and start with a family photograph of the Christening of Prince Charles in 1948 with the then Princess Elizabeth. The Caribbean island of St Vincent issued a set of stamps in 1987 to celebrating both the Queen's Ruby Wedding and the 150th anniversary of Queen Victoria's accession to the throne of which this is the commemorative sheet.  In a link to the latter theme the christening robes are the ones worn by Queen Victoria's children and given to Elizabeth by her grandmother Queen Mary.
It is lovely weather for a wedding here at the moment and as sunny as this one in Albanian, a detail from "Dasma Shkodrane" (Shkodra Wedding) by Kolë Idromeno (1860-1939), who was a bit of a polymath being a painter, sculpture, photographer, architect and engineer. He was the first person in 1912 to show motion pictures in Albania  and corresponded with the Lumière Brothers. His paintings and photographs show local culture and this wedding was taking place in Shkoder, the regional capital of Northern Albania and one of the oldest towns in the country. They have houses with high walls which Idromeno shows in the rest of his painting.
The Queen was married in slightly grander surroundings of Westminster Abbey in November 1947 which was the same place chosen by her
grandson and his bride. The cover combined the 2011 Royal Wedding stamps and  the 900th Anniversary of Westminster Abbey stamp of 1966 showing the fan vaulting of the Henry V11 Chapel .  The Abbey has been the venue of many royal marriages and even more royal coronations since 1066. Many monarchs are buried there as is the Tomb of the Unknown Soldier, a soldier from the first World War who as the expression goes, known only to God.
To complete the life cycle I end with the death of Franklin D Roosevelt who probably vies with President Kennedy in the number of times appearing on other countries stamps. Roosevelt made a famous speech to the Greek resistance to fight on during the Second World War and although he did not live to see the declaration of victory in Europe he did see Greece's liberation from the Axis powers in 1944.


An entry to Viridian Postcard's Sunday Stamps theme of Birth, Marriage and Death 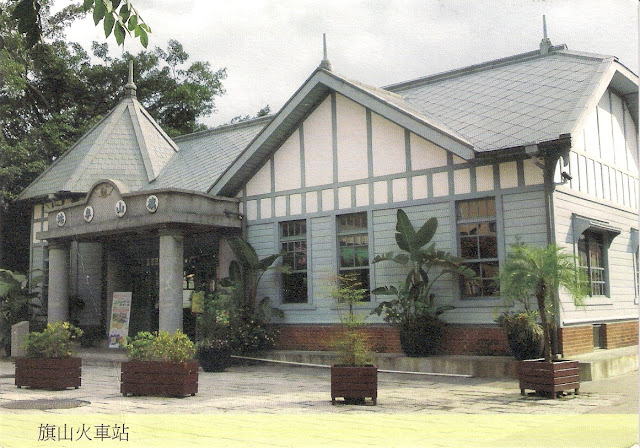 This railway station looks the perfect place to wait for a train and maybe look at the luxurious palms. My sender, Joseph, says this station was built for a sugar factory in 1910 and the card explains more if Mandarin  is one of your languages, unfortunately despite a love of  Wuxia films its not one of mine. 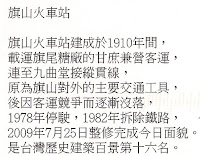 Sugar has been grown in Taiwan for 300 years and in the early 20th century under Japanese rule a narrow gauge (2 ft 6 ins) railway was built and run by the Meji Sugar Co Ltd,  after that time it came to be operated by the Taiwan Sugar Corporation. At its peak there were 3000 Km of track which hauled sugar cane from the fields to the mills and  also a small amount of passenger use (a lot of the lines linked to main stations).  Trade gradually declined and most refineries closed so today it is a shadow of its former self but some parts are in use and also visited by tourists, the little stations are scattered along the lines. I have seen a few photographs but can't see the one on the postcard.  For all rail enthusiasts Citycat's Railway site has some wonderful photographs of Taiwan railways from old to new and more. They definitely look as though they would be fun to ride.

The card came with one of the 2012 'Berries' definitives, Solanum americanum, the Glossy Nightshade which in Taiwan grows in waste places, roadsides and fields. In some countries the leaves are used as a vegetables. Like all nightshades the berries are toxic, the green more so than the ripe ones shown on the stamp, although I read that sometimes they are made into jam and it is though that the boiling process breaks down the toxicity. I don't think I'll test that theory.
Posted by Joy at 23:46 No comments: 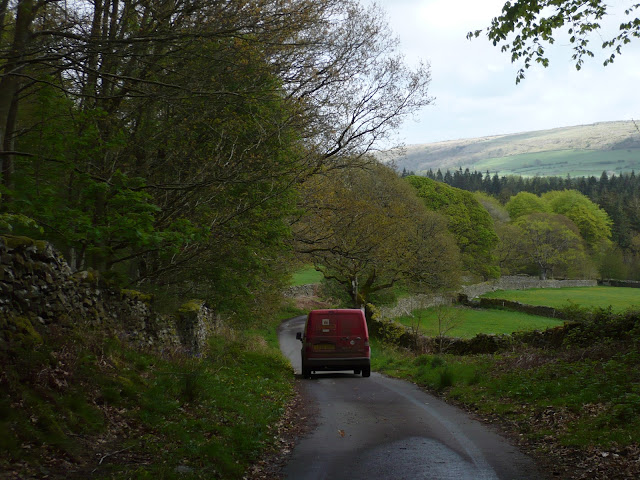 Postie on his rounds in the Cartmel Valley, Cumbria. . I'm not usually fast enough to retrieve my camera and snap but on this occasion I was ready.  Not only that but we continued our walk down this road through the woods (which as it was May were full of bluebells), over the hill and  fields and voila 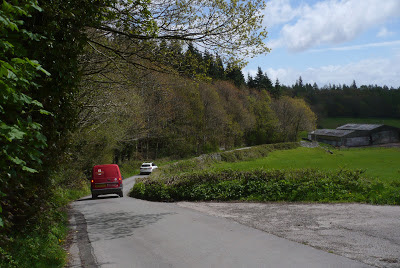 it seems we were following postie's round.
Posted by Joy at 00:04 1 comment: