What better place to start than the house and workshop of Victor Horta (now a museum) one of the founders of Art Nouveau in the 1890s. It forms with three other town houses in Brussels a UNESCO designated world heritage site of human genius under the heading Major Town Houses of the Architect Victor Horta.
As a contrast here is the ancient and mighty bulk of the 10th Century Bouillon Castle built on a rocky ridge by a sharp bend of the Semois River. Cut into the rock face, deep damp dungeons and a drawbridge entrance, everything one might want of a castle, unless one had to live in it. The next view is the rococo 18th Century Lier Town Hall which integrates an older structure of a belfry dated 1369, one of 32 belfries throughout the region which are drawn together as part of the UNESCO heritage site 'Belfries of Belgium and France'. Another of those belfries
is here.  The123 foot tower on the Cathedral of Our Lady which dominates the skyline of Antwerp and if you stand in the square at the right time another treat is to hear the clock carillon.
Next we have Spontin Castle whose main tower was built in the 13th Century but in the late 16th Century a major overhaul took place, windows were drilled into the structure and part of the fortifications demolished and it was transformed into a home or chateau, the interior  was altered through the centuries.  Today according to Wikipedia it is "in a precarious state of neglect".  Presumably when it was chosen as a stamp subject it was in a much better shape
but its fairy tale towers still resonate because this imaginary sand castle is built up from details of 5 existing castles one of which is Spontin seen on the previous stamp (the others in the sandcastle are Gaasbeek, Colonster, Alden Biesen and Antoing).  Touching the stamp sheet is just like returning from the beach and as we know sand gets everywhere so there is a rough sand-grain effect on the surface on the stamp sheet.

A summer picnic what could be more delightful and this one is a gathering of artists.  Formed in 1886 an artists colony was born in the village of Önningeby around the Finnish landscape painter Victor Westerholm.  It was one of many Nordic artistic colonies in the late 19th Century inspired by the impressionists and painting outdoors. In 1884 Westerholm had bought a summer house in Önningeby by the Lemstrom Canal and encouraged his friends to join him in the Åland Islands to paint.  I think the postcard shows the first summer gathering of the eight friends in 1886 and over time the numbers would grow until with the coming of the first world war and the death of Westerholm in 1919 it came to an end.

The stamp shows a drawing of 1891 by Victor Westerholm in indian ink depicting the scenery of  Önningeby.  It is said the area is not particularly scenic but the existence of many large farm houses meant there were lots of places for the artists to stay.  Today one of those farmhouses, the Jonesas Farm, has been converted into a museum and exhibits paintings by some of the artists who stayed in the colony, unusually for the time a large number of those artists were women.

The village of Önningeby and its museum is vaguely in the area of my arrow above, 4 miles north east of Mariehamn. Victor Westerholm came from Turku on the coast of Finland, a 6 hour ferry journey away and the artists came from both Finland and Sweden so you can also see the ferry routes they would have taken. when they attended the Spring Postage Stamp and Postcard Show, their luggage would have included this Exhibition Card whose theme in 2017 was mail boxes, many of which are painted, the islanders letting their inner artist free. 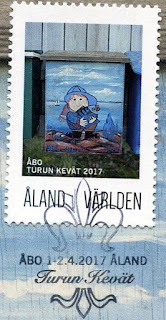 The exhibition stamp shows the box in place (often they are hung in rows so you can just see the one next to it) with the exhibition cancel which as the Åland Islanders speak Swedish uses the Swedish name for Turku - Åbo. 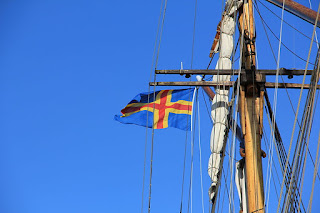 This week's Sunday Stamps II prompt is the letter A - for Art, Åland and Åbo - See It On A Postcard.

On Lusaka's Cathedral Hill sits the Anglican Cathedral of the Holy Cross, it was built in the 1960s and the light of the African sun streaming through the coloured mosaic of stained glass must make the services go with a zing.  From Zambia I journey into the air
with a Zeppelin. The particular airship chosen for the stamp by Guyana is the LZ92 it was launched in 1917 and mainly used by the German military for reconnaissance missions although it did drop bombs once on some British docks. From war to peacetime 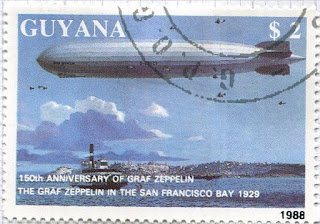 and the most successful airship in history the Graf Zeppelin FZ127 launched in 1928 which took regular flights to North and South America, other destinations included a world tour in 1929 and an Arctic trip in 1930.  Eventually the airship was dismantled in 1940 on the orders of Herman Goring. 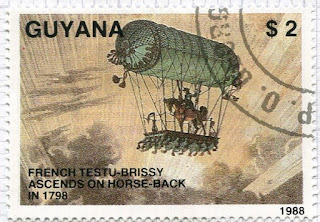 Going back in time to the some of the first adventures into the skies here is Pierre Testu-Brissy on a horse taking off from Bellevue Park, Paris. The horse had been trained to stand perfectly still on a platform regardless of the surroundings unfortunately its nose started to bleed due to the altitude of the balloon, happily both horse and rider returned safely. This was the first horse mounted balloon flight, zany.


The Sunday Stamps II prompt this week is the Letter Z - for Zambia and Zeppelins - for more Zs zoom over to See It On A Postcard.
Posted by Joy at 12:20 4 comments:

For the UN International Youth Year in 1995 the Austrian artist Gottfried Kumpf produced this FDC. As well as his paintings he is known for his small bronze sculptures of animals and people and the twins he created for his series on the zodiac signs appear embossed on the cover.  The little figure he is famous for is of his Kumpf sitting down called 'Asocial' or 'Social Misfit' 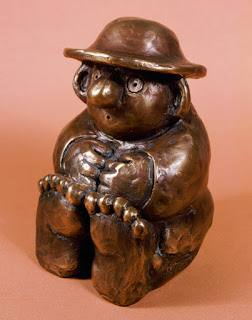 but a more accurate translation from what he has said I think is rather the artist as outsider observing but also needing a place to dream. Sometimes he places this figure hidden in the periphery of his paintings but I think he has placed himself this time 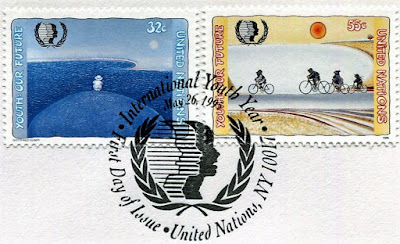 in plain view 'Man Looking Out to Sea'.  The other stamp is on the move with cycling family.  When he was a young boy Kumpf liked to go out with his dog and sit and paint whereas 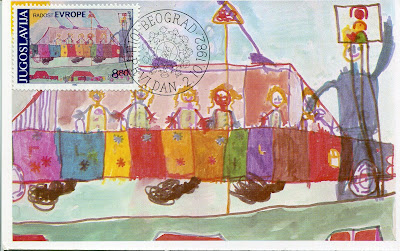 Tibor Božo, aged 6 took a walk around his home town of Subotica to watch and paint the traffic.  The stamps and cards were issued by PTT (Post - Telegraphic - Telephone) whose museum in Belgrade hosts a children's postal hour the first Saturday every month, well I think it does because the website doesn't seem to have been updated in a while.  I do know that the 'Joy of Europe' festival which the stamps celebrate is still going strong, founded by the city of Belgrade in 1969 and organised by the Children's Cultural Centre it takes place at the beginning of October every year 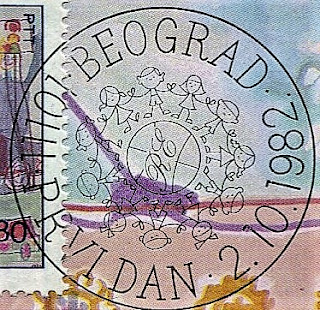 with dance and music. So I move to paintings by children to a painting of a child
and Otto Nagel's 'Portrait of a Young Girl' which is actually his daughter Sibylle who was born in 1943.  The painting today is in Dresden's Galerie Neue Meister which displays painting from the 19th Century to the present.
Lastly who can resist a baby elephant stamp. I could claim that this is a link to where I started this post with Gottfreid Kumpf whose sculpture of a baby African elephant stands outside the Natural History Museum in Vienna but really it is serendipity.


Sunday Stamps II prompt this week is the Letter Y - for Young and Yugoslavia - be Ys and See It On A Postcard
Posted by Joy at 14:42 6 comments: